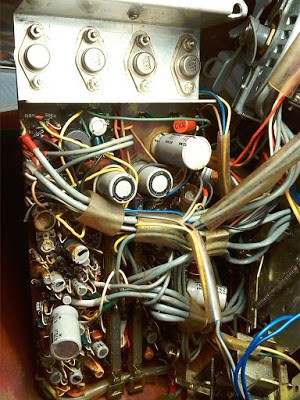 Previous PostNext Post
BROWSE
TC-252 is 3 speed reel to reel player manufactured by Sony in around 1970 – 1972. This is transistor based tape player with 4W × 2 audio output power, sound-on-sound and sound-with-sound recording features.

The TC-252 which we got to restore had many problems. Major problem is someone alter the circuit in that recorder and attach LA4440 power amplifier into the circuit. Apart from that, motor speed of that recorder also starts to decrease after 10min of continues playback. Other than above two major problems it had some mechanical problems in playback position and all the potentiometers in the front panel are damaged beyond repairing.


As a first step of the restoration we remove the LA4440 module attached into that recorder and rewire the player with original wiring layouts. After rewiring we check all the transistors in that player and find-out that the couple of 2SC634 transistors are damaged in that player. Because 2SC634 is not available in the market we replace those damaged transistors with BC548 transistors.

After cleaning and reassembling the mechanical unit TC-252 player starts to work. Compare with most of the reel to reel players TC-252 looks like a basic player, but we really like it’s playback audio quality and audio output power.