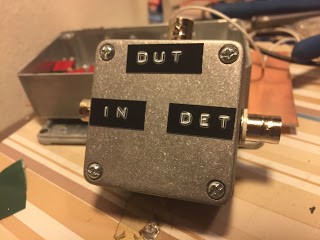 I have had some problems making return loss measurements using my homebrew directional coupler, and decided to build the return loss bridge from EMRFD and the ARRL handbook.

This is the final device. Obviously, “IN” denotes RF input, “DUT” denotes Device Under Test, and “DET” means Detector.

The circuit (picture from the handbook) is fairly simple. I used 51 Ohm resistors and a FT 37-43 with 10 bifilar turns and BNC connectors.

I connected the bridge to a spectrum analyzer to get a picture on the directivity.

I used my homebrew dummy load as a 50 ohm terminator.

I guess you need experience with a similar spectrum analyzer to understand the plot, but anyways, I measured a maximum return loss of 37.6 dB, which I believe is fairly good directivity for a homebrew return loss bridge. It should be noted that the dummy load is not an excellent terminator, but is ok up to about 100 MHz.

The same plot show the return loss on my shortened 20 m dipole. The SWR is at its best at 1.46 at 13.8 MHz. It seem a bit detuned as it should resonate in the low end of the 20 m band, but fixing the antenna is another project.

All in all, the return loss bridge was a fun project, and I am sure it will be a useful tool for future measurements in my little home lab.