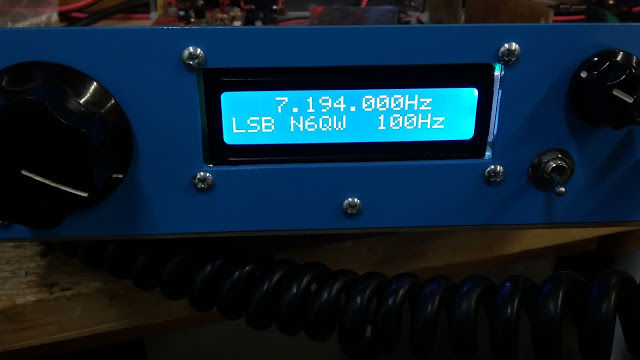 Listen to the Junk Box Radio…

Ever wary of unwanted frequency mixing schemes and picking an IF too close (harmonically) to another band, I decided to change out the Yaesu 3.180 MHz Crystal Filter. The second harmonic of the BFO is at 6.4 MHz which is in my opinion too close to the 40M band with just the simple Band Pass Filter I am using. Adding a better BPF (more poles) or changing the IF would of course provide better solutions to my concerns. Still another solution would be to use dual conversion approach to mitigate the problem.

I opted to change the IF frequency as I had a spare 9.0 MHz GQRP Club SSB Filter. The change from 3.180 involved unsoldering two wires and the mechanical removal of the filter from the board. The Z in/out of either filter is 500 Ohms, thus requiring no change in the matching transformers. Insofar as Arduino code changes, about a total of eight entries and that was it. Since the LO is above the incoming there is a sideband inversion so the lower frequency BFO frequency is used to receive LSB (8.998500 MHz) and USB uses the upper 9.001500 MHz Carrier Frequency. The changes went FB and we now have an IF of 9.0 MHz. I now would feel more comfortable in moving the rig to 20 Meters. BTW total elapsed time was about 30 Minutes for the hardware change out and the software modifications / loading on to the Arduino Pro-Mini.

This is the beauty of my approach to building a rig. Changes both in hardware and software can be easily made without a complete disassembly of the radio. It is truly an experimenter’s platform.

The one nice facet of our beloved hobby is to make contacts and hopefully by what I have done with the last several transceiver projects is to inspire others to “take up the iron”. Perhaps one of the most powerful ways that can be done is by using the rigs on the air. I have actually spent more time on the air in the last several weeks than I have all year long. True much of my operation has been in short bursts like 20 minutes here and there — but the results have been many fold. Not only have I met some really great people; but the interest level has ramped up with many inquiries about the rigs I have built. Perhaps one or two will be inspired to build their very own rigs.
73’s
Pete N6QW
Ramping up the Power!
Yesterday I added some switching circuitry so I could simultaneously key up the Atlas 210X “brick” and my SB200 Linear Amp. I am happy to report I can now put out about 600 Watts into my droopy dipole. This now should give me a shot at working coast to coast with the droopy dipole.
Another critical part of the tests were to make sure I wasn’t tripping (or ripping up)  the security alarm, telephone system, sprinkler system or the cable TV. All is clean and so the grounding, shielding and good wiring practices have paid off.
I am very pleased at the performance of this radio and now with winter coming on want to do some serious 40M operation. I note that in the early morning hours I am routinely hearing stations in Japan and Indonesia on 40M SSB. So that is another goal to make contact with these station and I feel possible with this rig and the amps. I hardly ever run it at 3 watts so I guess my QRP award is in jeopardy of being revoked.
73’s
Pete N6QW

Some observations and updated information

I continue to be amazed at the performance of this “Junk Box Rig”. Signal reports affirm its good quality signal and nice sounding audio which does seem to have some added “sparkle” to the sound. I attest the audio reports to spending some time in improving the frequency response of the PNP microphone amplifier. A bit of time with LT Spice pays off in big dividends.
You can’t imagine my surprise several days ago where about six stations in a row contacted me for details about my rig and how it was built. There is no finer compliment than to hear your station being called by others. With a bit of tuning and some improvements I now get about 115 watts out using the linear amplifier “brick” liberated from an Atlas 210X SSB transceiver. This power level now enables easy QSO’s into the mid-west and western Canada with my “droopy dipole” installed on my postage stamp sized Southern California lot. A better antenna would definitely extend the range into the east coast on a regular basis. So the antenna does count. In fact typically the second question after the usual first question about the rig is what kind of antenna are you using?
Extensive use of a radio will often identify “issues” and so it was with the Junk Box Rig. I found that after an hour or so of operation the rig would not return to receive after a lengthy transmission and at times even though the rig would go into transmit — there was no output signal. The problem was traced to the solid state switch. I found that when this occurred the SN7400 IC which was wired as an inverter was “hot”  to the touch. Not just warm; but burn your finger hot. So my fix was to install a small 12VDC SPDT relay in lieu of the switching board. Problem fixed and a simpler solution. The radio no longer suffers from that hang up. But it does beg the question as to why? I will do some further bench evaluation –but in keeping with the theme of this rig –the relay is what I found in the junk box — and even though the relay is small its contacts are rated for 3 Amps DC at 32 Volts –so plenty of head room.
To seem repetitious often when we challenge ourselves to find solutions by using what we have an end result which is often better than simply flipping out the plastic and buying new. I have quite a few boat anchors and aside from the KWM-2, this rig hears better than most of those radios of old. With a bit of scrounging and some horse trading this rig can be built for less than $150. The frequency generation part, BFO, encoder and the LCD can be bought for about $20. The SBL-1 Double Balanced Mixers can be purchased from RF Parts for about $16 and the Iron Powder and Ferrite cores add about $10. The real bang for the buck is the pleasure of saying my rig is homebrew built by me!
So what is on your bench???????
73’s
Pete N6QW

It has been one week since we made the first contact with the 40M Junk Box SSB Xcvr and I am happy to report that the hunk of junk has now been given a proper and fitting home. 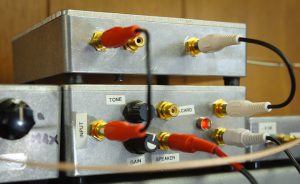 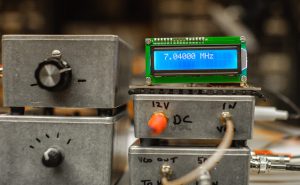 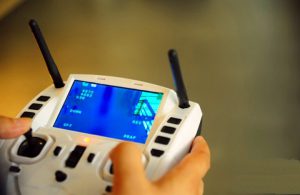 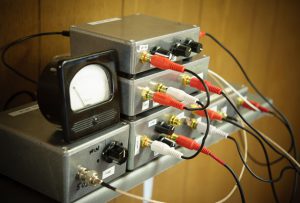 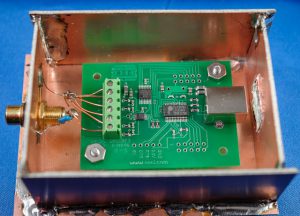 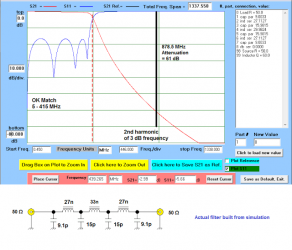 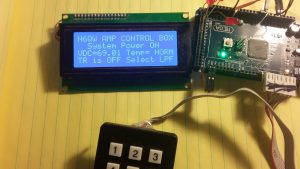 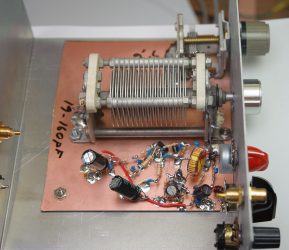 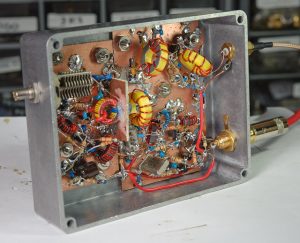 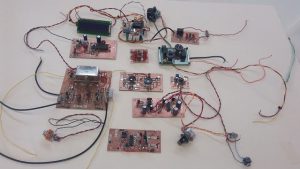