What is a VFO (variable frequency oscillator)? 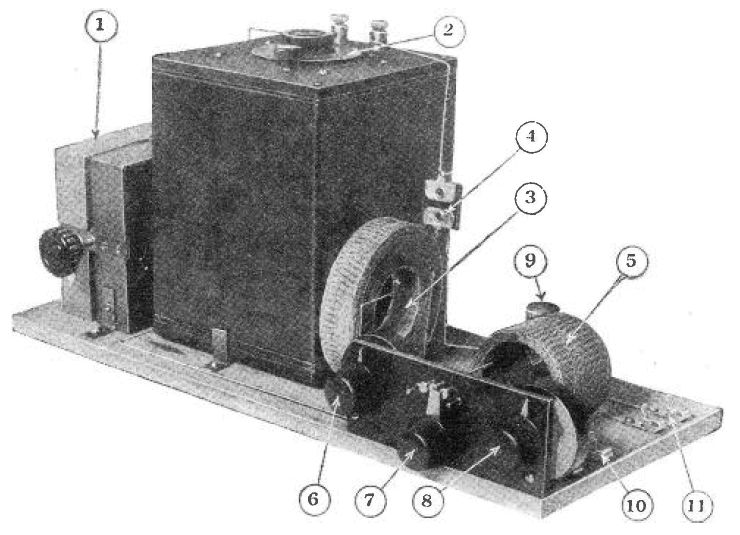 The Variable Frequency Oscillator ~ aka “Grief in a Box”.

Whether you have an appliance radio (store bought) or one that you made with your own hands somewhere buried in the innards is a variable frequency oscillator.  However if you are running a single channel fixed frequency device such as a crystal controlled transmitter or receiver then maybe that is not the case. The acid test is if you move a knob or mouse pointer and you are able to change the frequency, then you have a VFO. A special case may be the VXO which is a variable crystal oscillator which uses the properties of a quartz crystal to shift its frequency of oscillation over a small range. But the VXO usually has a knob adjusting a variable capacitor or a pot controlling a voltage variable capacitor.

But I really want to focus on the knob turning, mouse pointing variety of variable frequency oscillator. There are various ways to generate a variable frequency starting with the very early approach involving analog circuits where an inductor and capacitor formed the very heart of the VFO. When an inductor and capacitor are linked up, either in series with each other or in parallel, a resonant circuit is formed. If this combination is placed in an amplifier circuit and certain conditions are met with respect to internally generated feedback the circuit will oscillate at a frequency determined mostly by the  inductor and capacitor values. Other factors that impact the actual frequency of oscillation include stray capacitance and/or inductance as a result of component lead lengths. For these reasons most VFO construction tutorials stress short direct connections and isolation from other circuit elements.

There are many types of analog VFO circuits with names like Hartley, Colpitts, Clapp, Vacker, Seiler, Franklin, ECO. The difference among these types basically is how the L and C are combined (series or parallel), the method of achieving feedback, where the load is placed and finally the coupling to the load. Some of these circuits are very load sensitive and you will frequently see some sort of follow on buffer amplifier to isolate the actual load (such as a mixer stage or convertor stage) from the oscillator itself. Below are two examples of oscillators with the first being a Hartley and the second called a Vackar. [The naming typically follows the person who invented the circuit.]

For those who have an insatiable desire to know where every nut and bolt is hiding there are many factors concealed in the bushes as to why the circuit oscillates. Some factors have to do with the physics of inductors and their response to  being charged and collapsing electric fields while others have to do with capacitance discharge rates and flywheel effects. I do not plan to cover these other than to recognize that certain conditions have to be met for an analog circuit to oscillate.
Here is part of why I used the term “grief in the box “– getting a circuit to oscillate is but a slice of the pie as then the builder is confronted with keeping the circuit in the oscillating state over the desired range. When you twiddle the knob or move the mouse pointer the objective is to keep it oscillating over the entire tuning range. That does not always happen.
Another pie slice is oscillator stability which has several subsets. There is the “drift factor’ manifest as either “initial turn on drift” where as the circuit elements heat up from a cold start the frequency will drift. This can be a very large amount in the range of several hundred hertz to kilohertz. Capacitors especially are subject to temperature drift and the inductor as well will respond to temperature changes.

Another drift factor is “long term drift” where after the initial “turn on drift”, over time the frequency will shift albeit usually a smaller amount. Turn on drift as stated may be in order of magnitude of kilohertz whereas the long term may be 100 Hertz. Fifty years ago a few kilohertz drift was common. Today the Flex Radio Operators on 40 Meters will scream at you if your rig moves 10 Hertz — so with progress there are some penalties.

Other issues include “FMming” a term often applied to certain older boat anchor inexpensive commercial appliance radios that lacked good voltage regulation. Typically these vintage radios featured 500 watt sweep tubes and with a marginal power supply on voice peaks the VFO regulation suffered. The result is the SSB signal frequency that varied with voice peaks –thus frequency modulation. Before we leave VFO voltage regulation that is an issue in itself as the lack of adequate voltage regulation results in frequency drift.
A similar problem was when the VFO was built  “al fresco” with no shielding such that the output RF signal was being picked up in the VFO circuitry and this results in distortion.
Hopefully now you understand why I call it “Grief in a Box”! But in examining all of these maladies there is a general approach that cures many of these problems and most of the cures are physical in nature. So for those contemplating building an analog VFO behind the schematic is a host of factors that if properly addressed  will assure a success. Lets us examine some of the physical factors.

The above cover much of the well known cautions and tribal knowledge in analog VFO construction and if you are looking for a simplification in building an stable analog VFO –there is none! There is much effort involved if you want to have a stable VFO. Translate this to hours and days of work versus a hour with some wire wrap tools and 30 Minutes writing some code for an Arduino. Unless time is well spent on analog VFO construction you will have grief in a box!

Above all feel free to add your additional comments on how to avoid “Grief in a Box”.