A Little Arduino Magic for the FPM5 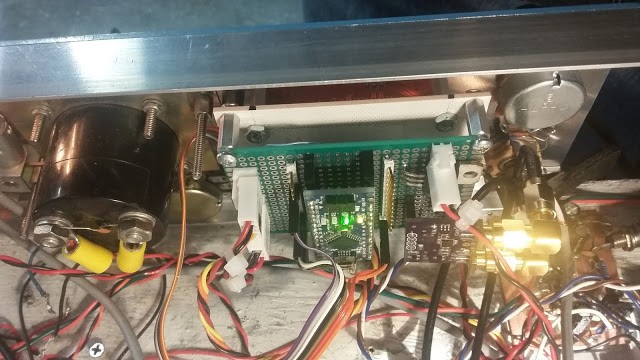 I should start by saying that I have been receiving a lot of world wide input on my “clunky” solution to changing bands and having the display read correctly. In quick review my “clunky” approach was to move the band switch to the band of choice and then hit a momentary Push Button and Shazam! the display would read correctly and as a bonus the correct filters would be selected. The inputs received were in the “bowling lane” of simply move the band switch and the display will read correctly. I used the term bowling lane to reflect a large path of approaches versus a narrow line.
Some suggestions worked, others didn’t and some worked better than others. The root cause is that I am using then analog pins for the band switch input. As the Oracle of Italy and one of the founders of the Arduino project, Massimo Banzi stated in his tutorial “you could read the random noise on one of the analog pins and use that for a random number generator” and that my friend is without anything even connected to the pin. So a lot can happen and does! Several early suggestions were to use either the internal software pull up (Arduino 1.0.1 or later) or to physically install pull up resistors. By doing this there is 5 volts on the pins and random noise is ignored. Thus to activate the band the pin is pulled low to ground through the switch contact again no random noise. Thus the analog pin is at 5 volts or ground and nothing in between!
In reality nothing to date works as well as my clunky solution; but I am sure with more effort the software solutions will prevail. This is where my lack of software genes, advanced age and frankly not knowing anything has come home to roost. But I do thank all who have given me input –BTW I have picked up a few new tricks that will prove helpful in other things I will do.
Oh in tripping through the options you can have for this blog –after over a year I found out you can actually search my blog inputs –so look for the search box. I did try it and found it works. But hey what do I know. The comment from Sgt. Schultz in the TV Comedy, Hogan’s Heroes: “I don’t know nothing” is well applied to me personally!
73’s
Pete N6QW

Today had a couple of more 75M contacts and this time we made the 400 mile hop to Sacramento running 100 watts and got an excellent signal strength and audio report. The 20 Meter output has increased but is still only about 40 watts. I do notice a tendency for oscillation if you crank the power higher on 20 Meters –so my haywire, ground loop, poor shielding resulting from the “al fresco” layout will be further evaluated once I move to the box and have better grounds, shorter wires and shielding.
Today I installed the Arduino/Si5351 literally on the front panel. The TFT uses four mounting holes. Instead of a nut on the four screws I installed a 3/4 aluminum 4-40 pillar. I then made a vertical sub-chassis that was just slightly larger than the prototype board I am using for the Arduino/Si5351. So the drill is that the Arduino/Si5351 will be mounted on the vertical chassis which in turn picks up the 4 mounting pillars holding the TFT color display in place. This conserves space and makes this more compact. Once again I used right angle SMA connectors off of the Si5351 board.
12/01/2016 ~ News Flash — 1st contact on 75 Meters
I still have the crude 3 position “bandswitch” (two DPDT toggle switches) which controls the BPF and LPF banks  and for the most part have only listened on 75 and 20M. All of the QSO’s so far (well over 200) have been on 40 Meters.
So here in the 12th month I thought I would try a contact on 75M. It works! Today I had a nice 15 Minute chat with Bill, K6GZ located in Hesperia, CA and now confirmed that the FPM 5 is air worthy on 75M.
Some initial tests into a dummy load on 20M have been less than satisfactory as the output is really low–like less than 200 MW. I will be chasing that down and possible problems are I goofed on the BPF and LPF calculations or some of the earlier amplifier stages tend to favor the lower frequencies. If all worked the first time then there would be no fun, no hair pulling and no drinking!
Greg VK1VXG in response to my post of yesterday has scratched out a solution to the band switching that involves less hardware, really simple programming and consists mainly of dropping the water level versus building a completely new higher bridge. Thanks Greg! Now I have some more Arduino work to challenge my feeble brain.
73’s
Pete N6QW
11/30/2016
For those who have just joined us, the project currently on the workbench is taking the mainboard out of a 1970’s hallicrafters FPM300 and building a whole new transceiver around that board. The original 1970’s FPM300 was a hybrid radio using tubes in the driver and final stages. For my project I have added the Si5351 for the frequency generation and carrier oscillator and along the way added a 128 X 160 color display. The rig is designed for QRP operation at 5 watts but can be configured to run 700 watts out. The rig is now working on three bands and soon the other two bands will be added. At completion it will operate on 80, 40, 20, 15 and 10 meters just like the original FPM300.
Putting the new rig on multiple bands was to be done using a conventional 5 position panel mounted switch. Sure I could have used a keypad and simply punched a key and the rig would have been on a new band. A year ago I did that with a Ten Tec Model 150 which formerly was a crystal controlled commercial transceiver. But this time I wanted to have a rotary selector switch to select the proper Band Pass and Low Pass filters. Besides this gave me a chance to learn to make circular dial plates on my CNC mill. BTW that adventure did take several tries before I figured out the indexing was 30 degrees and not 36 degrees! The band pass and low pass filter elements use a common buss with pairs of relays at each end of the networks. Then by applying power the correct sets of BPF’s and LPF’s are put in line on the band you want to work.
The following photos show the dial plate, the rig “al fresco” operating only on 40M and the third photo the addition of the BPF and LPF boards which now has it operating on 80, 40 and 20 Meters. I was having a problem with the 20M band –the rig was deaf. I thought perhaps I had a problem with the 42IF123 IF transformers that were modified to work on 20 Meters and so now the 42IF123 transformer style BPF has been replaced with a discrete component BPF that was first simulated in LT Spice. BUT that still didn’t fix the deaf problem. Then I discovered that I had not soldered the ground pin on one of the two 20M LPF relays to the ground plane. So no signal was being switched into the 20 Meter LPF from the antenna buss. A quick dab of solder and peaking of the BPF and it now is working on 20M. A check of my work after I soldered in the parts would have found that problem early on. I just got in a hurry.