FPM5 — Coming Down the Homestretch! 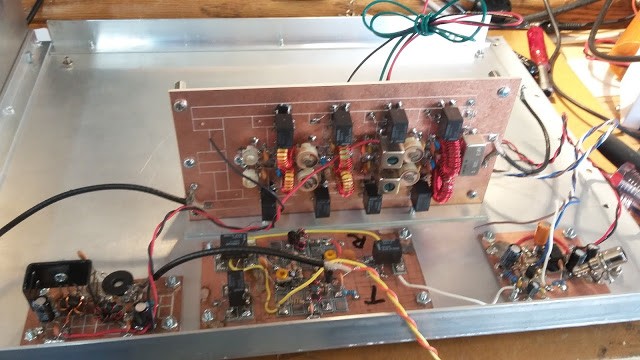 FPM5 ~ The Final Assembly is on the Threshold!

Something weird happened today! At about 10:00 AM two boxes showed up at my door step. One was the wire needed for wiring up the FPM5 plus a couple of 8X2 LCD’s and some other  parts. Now I can get started in earnest with the final wiring phase of the FPM5. The second box was addressed to me complete with my call sign and the return address was from a person in New Mexico. That seemed strange as I hadn’t purchased anything not even on eBay.
So I open the box and contained therein are three rolls of solder. Hey cool something I can use –I am burning lots of solder these days. But I was mystified. Then I had a TRGHS moment and realized what was going on.
Several weeks ago I checked into the Albuquerque Boat Anchor Net. The check in process involves identifying your station and what sort of boat anchor gear you are running. I could hardly contain myself as I explained that the basis of my rig was the hallicrafters FPM300 which had been re-incarnated as the FPM-5. I directed those on the net to look at my QRZ page for details. Well as it turned out every time the net meets there is a secret rig selected and if you are running that gear you get the prize. The night I checked in, the mystery rig was anything hallicrafters — Boom that is what I was running and thus being the only person running that kind of gear the prize was all mine –which in this case was three rolls of solder! The actual prize was not announced only that I won — yes TRGHS. Thank you Boat Anchor Net!
Pete N6QW

Today I installed boards in the box! Lots of measuring and hole marking and then final drilling. One serendipitous event was that initially I bent up (using my vise [or for my friends in the UK my vice]) a U shaped heat sink. Since the 5 watt PA board will be mounted directly to the back apron, the bent up sheet metal would now be redundant. But by using some aluminum [aluminium] pillars this heat sink has been turned into a shield cover over the PA board. Nice! Below are some of the installations into the case. Believe it or not — I am out of hook up wire an am now awaiting a shipment. This will hold up final wiring and integration.

I really think it is all going to fit in the box. Now before you jump on the comments about why did I make it so big and why couldn’t the box have been smaller, let me share some experience with you. In the Solid State Design for the Radio Amateur (SSDRA a book which I consider a more useful publication than EMRFD) the very last project from W7ZOI is what is called A Competition Grade CW Receiver which later morphs into a trans-receiver.
I built that jewel only went to extremes and built every module into an individual aluminum mini-box. All power was passed into the boxes using feed through capacitors and all signals in and out were via RCA connectors. Enter the first problem –if you wanted to adjust something or troubleshoot a problem, this required a major disassembly. Frankly it was quite hard to get to some of the circuit wiring once the boards were installed in the boxes. The really great idea was a disaster! One time in that rose garden and you soon know the roses look beautiful but the stems have thorns!
So a word or two about shielding. I marvel at how some complete radios are built on a single circuit board and there is no shielding and there doesn’t seem to be feedback problems. The newest rig, known as the Bitx40 from Farhan VU2ESE has a whole transceiver on a board 5 X 5 inches and seems to have resolved that issue. I on the other hand am not always so lucky. But I do strongly feel shielding is a good idea as is a common ground plane. Thus my approach to CNC the circuits on common ground plane modules is part of my shielding approach.
Another is some physical separation to reduce the possibility of unwanted coupling. Thus there are three reasons for the box size.
So here are some shots of the additional fit checking and board placement. The Low Pass Filter Board and Band Pass filter board will essentially be at right angles to each other and physically separated. The bi-directional (Rx RF Amp and Tx Pre-Driver) module is shielded from the main board and the Tx driver stage is a short physical distance from this board. This will keep RF leads to a minimum.
﻿

Some really good news — thanks in large measure to the efforts of Greg, VK1VXG, I now have the capability of when you move the band switch to a new band the new band starting frequency will display. Thanks to all who emailed me and made various suggestions –your efforts are very much appreciated. So we can now cross that off of the list.
Now it is time to get serious about putting the FPM5 into a case. I have noodled what the case should look like at completion and made it large –10 X 13 X 4. The basic metal work was completed today and now it is time to arrange the various circuit boards. My first pass has enlightened me that I will need to make a few adjustments such as placing some of the circuit boards in a vertical position. Realizing this could happen I made the widths of the boards so that they could be installed in a vertical position. In some ways this will also facilitate shielding and will place the boards in a position for maintenance and adjustment. The template was first set with my KWM-4 project.
Here is a sneak peek at the enclosure:
Previous PostNext Post
BROWSE