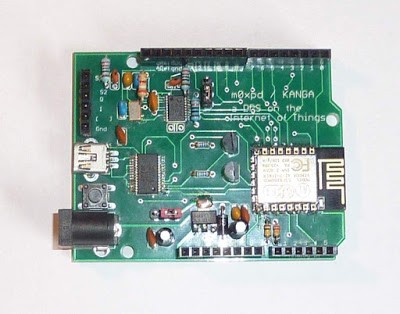 You can well see it is an engineering sample, because I’m squeezing the wrong size packages into locations (quarter Watt resistors where eighth Watt components should be, etc) and using a mishmash of different component types, but you’ll forgive me, I’m sure.

The new design presents the Expressif ESP8266 device on an Arduino-sized board, supported by a full USB programming interface and power supply.

I should be careful to explain – this is not a “shield”. It does not sit on top of an Arduino. It REPLACES the Arduino. It IS the processor – and a whole bunch more…

Of course, there’s all the interfacing headers you’ll need to connect it to other expansion devices (“shields”) from the Arduino ecosystem. This is nothing new – it is already available in commercial platforms out there, such as the WeMos D1 R2 (indeed, I made this new board largely compatible with WeMos’ digital I/O pin allocations).

Of more relevance to fellow amateurs, this new board includes a DDS system, capable of generating stable, controllable RF, using the AD9834 device.

You have here a powerful processor – significantly more capable than that on (e.g.) the basic Arduino UNO – with a full, on-board DDS system. All with access to the advantages of the Internet (time servers, geolocation, remote control, …). All on one little board.

The overall architecture is seen in the image below…

The output from the DDS module is taken to the header on the upper left hand edge of the board in the orientation of the photo above – which is the m0xpd RF bus I’ve defined previously for other shields. This facilitates the first application for the new board: to implement a beacon system, using the Kanga/m0xpd Sudden Transmitter shield, which can simply plug on top of the new board to make a complete beacon assembly.


The USB interface is implemented using a genuine FTDI chip, with the hope that interface problems should be minimised. However, I’ve just had all sorts of problems after upgrading the operating system of my MacBook Air to El Capitan, after which it seems incapable of operating reliably with ANY external peripheral – not just the FTDI devices.

The new board has flexible power supply options. It can be powered off the USB connection. It can derive power from the 5V supply from the Sudden Tx shield in the beacon application described above or it can be powered through the d.c. power jack visible at bottom left of the photo.

Of course – the collaboration with Kanga signals that this board – or the final production version – may soon be available for purchase as a kit. With the experience of the m0xpd Si5351 shield, we have discovered that many Kanga customers are not great fans of surface mount technology. Accordingly, this system has been designed with the intention that key SMD elements could be delivered pre-fitted…

leaving the kit buyer to fit only thru-hole components, one large voltage regulator and the ESP8266 module itself.

Here, finally, is the engineering sample, plugged into a Sudden Tx shield (itself a prototype) for the very first time to run my beacon code as a “stack”…

The little OLED display on the breadboard at bottom right is there just as a sign of life.

Although not so good these last two or three days, when it has been harder to burst far out of Europe, the same technology has been running WSPR and QRSS all over the globe for the past couple of weeks, as recent posts testify.

I hope that this new board might tempt some more radio hams to look toward the ESP8266 and the”Internet of Things” for inspiration and fun.