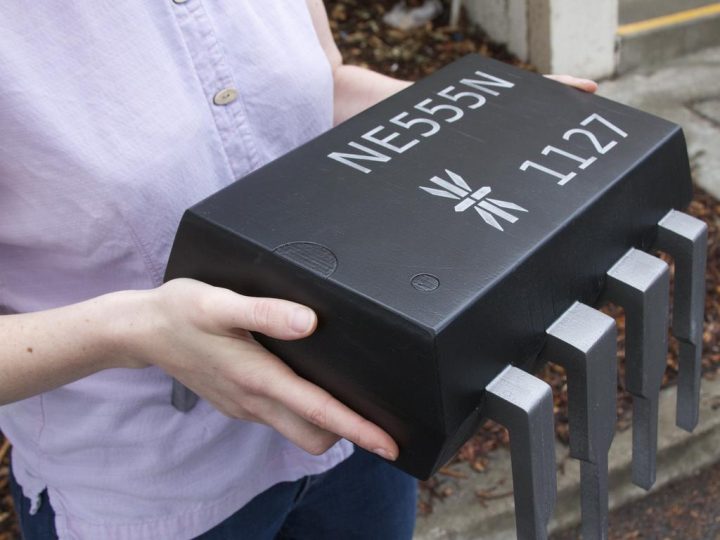 This article explains how the LMC555 timer chip works, from the tiny transistors and
resistors on the silicon chip, to the functional units such as comparators and current mirrors that make it work.
The popular 555 timer integrated circuit is
said to be the world’s best-selling integrated circuit
with billions sold since it was designed in 1970 by
analog IC wizard Hans Camenzind[1].
The LMC555 is a low-power CMOS version of the 555;
instead of the bipolar transistors in the classic 555 (which I described earlier),
the CMOS chip is built from low-power MOS transistors.
The LMC555 chip can be understood by carefully examining the die photo.

The structure of the integrated circuit

The photo below shows the silicon die of the LMC555 as seen through a microscope, with the main function blocks labeled
(photo from Zeptobars).
The die is very small, just over 1mm square.
The large black circles are connections between the chip and its external pins.
A thin layer of metal connects different parts of the chip. This metal is clearly visible in the photo as white lines and regions.
The different types of silicon on the chip appear as different colors.
Regions of the chip are treated (doped) with impurities to change the electrical properties of the silicon. N-type silicon has an excess of electrons (making it Negative), while P-type silicon lacks electrons (making it Positive).
On top of the silicon, polysilicon wiring shows up as other colors.
The silicon regions and polysilicon are the building blocks of the chip, forming transistors and resistors, which are connected by the metal layer. 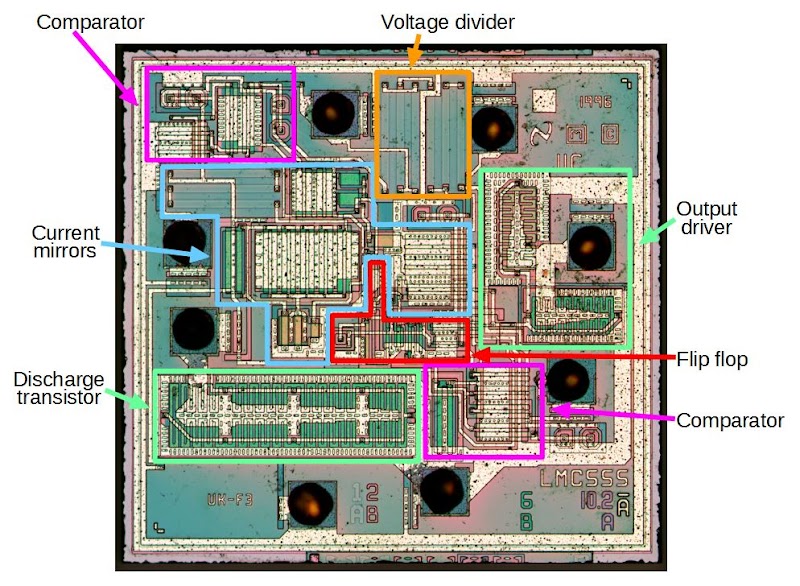 Functional blocks in the LMC555 chip.

A brief explanation of the 555 timer

The 555 chip is extremely versatile with hundreds of applications
from a timer or latch to a voltage-controlled oscillator or modulator.
To explain the chip, I will use one of the simplest circuits, an oscillator that cycles on and off at a fixed frequency.

The diagram below illustrates the internal operation of the 555 timer used as an oscillator.
An external capacitor is repeatedly charged and discharged to produce the oscillation.
Inside the 555 chip, three resistors form a divider generating reference voltages of 1/3 and 2/3 of the supply voltage.
The external capacitor will charge and discharge between these limits, producing an oscillation, as shown on the left.
In more detail, the capacitor will slowly charge (A) through the external resistors until its voltage hits the 2/3 reference.
At that point (B), the threshold (upper) comparator switches the flip flop off turning the output off. This turns on the discharge transistor, slowly discharging the capacitor (C) through the resistor. When the voltage on the capacitor hits the 1/3 reference (D), the trigger (lower) comparator turns on, setting the flip flop and the output on, and the cycle repeats. The values of the resistors and capacitor control the timing, from microseconds to hours.

Diagram showing how the 555 timer can operate as an oscillator.

To summarize, the key components inside the 555 timer are the comparators to detect the upper and lower voltage limits, the three-resistor divider to set these limits, the flip flop to keep track of whether the circuit is charging or discharging, and the discharge transistor.
The 555 timer has two other pins (reset and control voltage) that I haven’t covered above; they are used in more complex circuits.