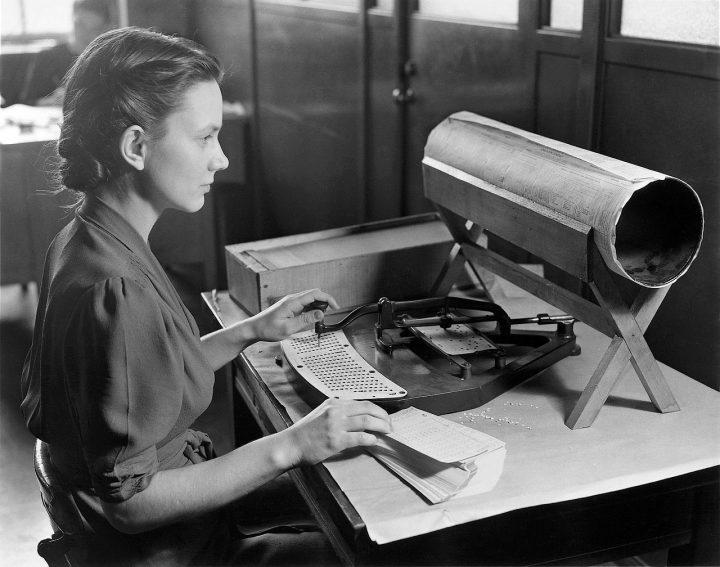 You might expect a sorter to haves multiple sensors to read the holes from a card and 10 flippers to direct the card into the right bin. But the actual implementation of the early sorters is amazingly simple and clever, using a single sensor and a single electromagnet.

An IBM punched card, showing the encoding of digits and letters.

The photo above shows the layout of a standard IBM punched card, which stores 80 characters in 80 columns. The characters are printed along the top of the card and the corresponding holes are punched below. For a digit, each column has a single punch in row 0 through 9 to indicate the digit in that column. (I’ll explain the two additional “zone” rows for alphabetic characters later.)

The diagram below shows how the card sorter works. Cards are fed through the sorter “sideways” starting with the bottom edge (called the “9-edge” because the bottom row is row 9). A small wire brush (red) detects the presence or absence of a hole; the brush will contact the rows in order from 9 to 0. An intact card blocks the wire brush from contacting the metal roller. But if there is a hole in the card, the brush makes contact with the roller through the hole, completing an electrical circuit.

For example, in the diagram above the card has slid under chute blades 9 through 5. The brush makes contact through hole 4, energizing the electromagnet and causing the blades to drop just before the card reaches blade 4. Thus, the card is directed into chute 4.

The chute blades can be seen in the photo below; they are the metal strips running down the center of the sorter between the feed rollers. Each chute blade ends at the appropriate pocket, causing the card to drop into the right location.

IBM Type 82 Card Sorter. The feed rollers under the glass top send cards through the sorter. The pockets at bottom collect the cards. This is a German model, thus the ‘Sorteirmaschine’ label.
Previous Page <<2 of 8>> Next Page
BROWSE

Original article by Ken Shirriff at his blog.