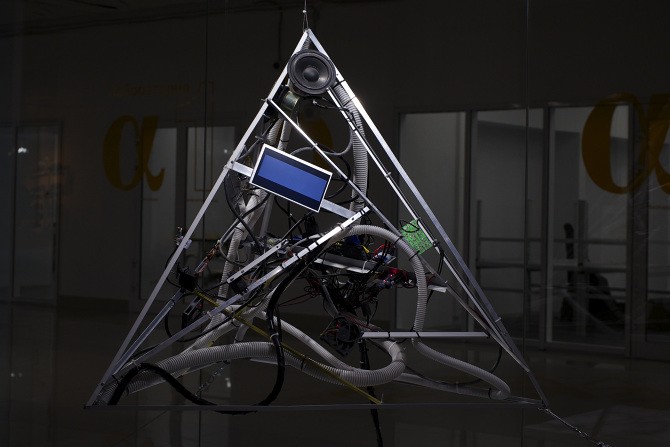 Moscow-based hacker artist ::vtol::, a.k.a. Dmitry Morozov, is back with another impressive project. His latest, called 2ch, is an interactive, pyramid-shaped instrument that enables two people to communicate via brain activity.

2ch consists of two NeuroSky EEG interfaces worn by both users, as well as two servo motors with a hall sensor and magnet, a two-channel sound system, a couple screens, and an Arduino. In terms of software, the instrument uses Pure Data and Max/MSP.

The project is an instrument for communication between two people by means of visualising the electroencephalograms of two members, which are translated into sound, mechanical motion, and video images. Two participants should try to synchronize their minds, guided by the pitch of the tone, visualisation and movements of mechanical parts.

You can read more about the brain-to-brain interface on Co.Design, and see how it works below!