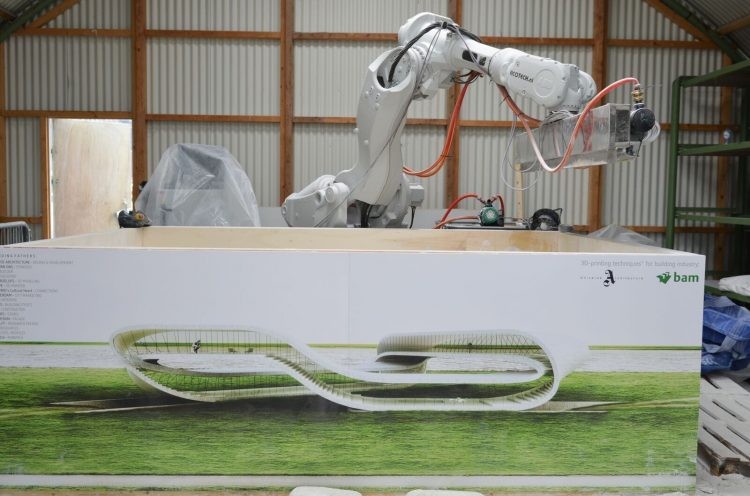 The world’s first 3D BUILDER will enter service on FabCity. This building machine is the first of its kind where free-form print technology is linked to automotive industry robotics. This ground-breaking innovation makes free-form architecture possible, as well as the creation of complex ornamental exteriors. The new robot with an exchangeable print head can print stone and concrete using the Italian D-shape method. In the future, it will be possible to link new print techniques for steel and insulation material, for example. Caterpillar tracks can also be placed under the robot  in collaboration with robotics partner AcoTech from Eindhoven – to enable it to travel autonomously across the building site.

The 3D BUILDER is going to start with the construction of the Landscape House on a scale of 1:4 on FabCity, the temporary sustainable campus at the end of Java-eiland in Amsterdam. Architect Janjaap Ruijssenaars of Universe Architecture says: ‘It is fantastic that we have jointly conceived a machine that can make something new. This was much more commonplace for architects during the Renaissance. Rutger Sypkens of BAM Bouw en Techniek adds: ‘As well as the form freedom, we are also very much taken by the circular process. Concrete granulate and pre-existing prints can serve as a raw material for the machine at a later stage.

The method is comparable to that of an inkjet printer, but instead of putting ink on paper, a bonding liquid is dripped layer by layer on sand that then hardens in any shape as desired. The materials now being used in Amsterdam occur extensively naturally, and were used by the Chinese many centuries ago for strengthening the Great Wall of China, for example, and by the Romans.

In 2013, architect Janjaap Ruijssenaars of Universe Architecture announced the creation of a building without beginning or end (Landscape House) using a 3D printer. In late 2015, the first step was taken on behalf of BAM, who very much embrace the direct method of production and the circularity of the materials; it concerned a 3D-printed stone bench for the city of Amsterdam.

Egbert Fransen, the culture intendant of the officiale EU2016 Arts & Design programme, Europe by People, says: ‘The fact that the creation of this unique collaboration is taking place at FabCity is proof that if you bring together different innovative parties, large and small, the result is ground-breaking initiatives that are relevant for the development of the city of the future.’ At FabCity, there are fifty pavilions, workshops, installations, and prototypes on display, with sustainability and the circular economy being key features. FabCity is accessible free of charge to all, until 26 June 2016.

For more information visit the websiite of BAM