The Floppotron is back with the Pokémon theme song 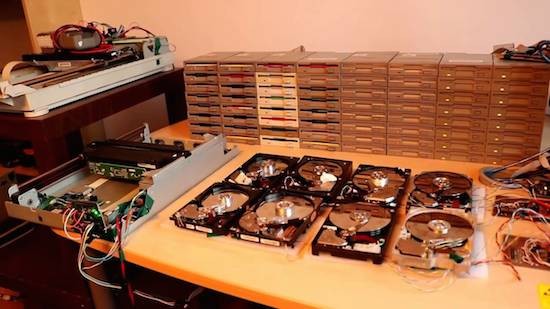 A few weeks ago, we heard Pawel Zadrozniak’s computer hardware orchestra perform a cover of Nirvana’s “Smells Like Teen Spirit.” Now, the Floppotron is back–this time with its own geeky rendition of the Pokémon theme song.

The Floppotron is comprised of 64 repurposed floppy disk drives, eight hard disks, and two scanners. Every column of floppy drives is connected to an 8-channel controller based on ATmega16 MCU. The higher the volume, the more drives are playing.

Meanwhile, the eight hard disks with a pair of 4-channel controllers act as percussion. The sound generated depends on the driving speed–the higher the frequency, the greater the pitch. Hard disks use a magnet and a coil to tilt the head. When voltage is supplied for long enough, the head speeds up and hits the bound making the “drum” sound.


To drive the coils, Zadrozniak says he employed a pair of push-pull outputs built using discrete SMD MOSFETs. Most of the tunes are made by the two scanners, both of which are connected to Arduino devices. Data is received over UART (USB-UART) and buffers messages to keep the music in time.

The host application is written in Python 2.7 and parses the language that is used to write note sequences and arrange tracks that go to a specific controller. You can read more about the Floppotron here, or just listen to the Pokémon anthem below!