Control your DIY quadcopter with one hand 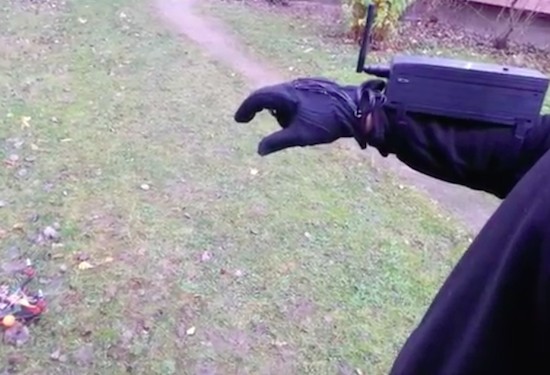 Back in 2014, Josef Holmner built his own DIY quadcopter with a flight time of 30 minutes. Impressively, he also developed a wearable controller that enabled him to maneuver his device through the air using just one hand.

As you can see in the video below, pitch and roll are dictated by the angle of his hand, yaw is handled by two push buttons in his palm, and throttle is achieved through the bending of his index finger.


To get started, Holmner needed a transmitter and receiver, an Arduino Nano, a digital potentiometer, a flex sensor, a pair of push buttons, an IMU, and a glove, of course. The Maker had torn apart the transmitter, replaced the regular potentiometer with a digital one that could be controlled by the Arduino. After taking out the electronics from its original enclosure, he housed them inside a 3D-printed box, and reused the old battery holder by gluing it to the bottom of the case. Velcro straps are used to keep it around his forearm.

The flex sensor was sewn to the index finger, while the buttons were placed in the palm and the IMU set on the back of the hand. He also made a connector between the glove and the box, and added four LEDs that illuminate to show the angle of the glove.

Holmner has made the Arduino code and schematics available online. Be sure to see it in action!