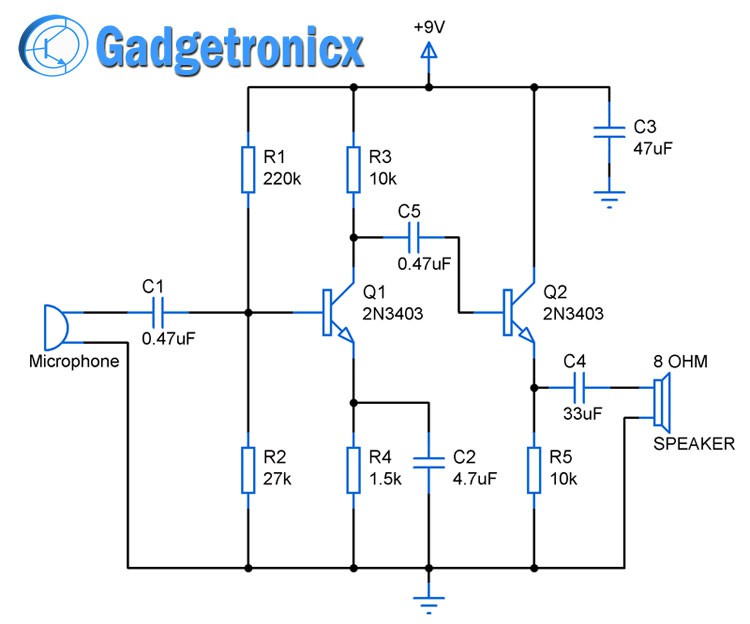 Amplifiers are very necessary element in any project dealing with signal strength and quality. Similarly Audio amplifiers are used to amplify the strength of speech signals and makes it more audible by amplifying it and put it through a speaker. Here we are going to see construction and working of a 2 stage amplifier circuit using Transistors.

This 2 stage amplifier circuit comprises of two stages each of which perform amplification on the incoming audio signals and output finally obtained at the end of 2nd stage. A simple Microphone was used to feed input audio signals followed by a coupling capacitor C1 which removes any DC element from audio signal.


Thus amplified signal is obtained from R3 and goes to the next transistor stage through a coupling capacitor C5 to remove the DC element from the signal. R4 serves the purpose of providing feedback to stabilize the DC bias given to the Q1 transistor. C2 was used to maintain the gain at which the voltage of the input signal in amplified by this stage.

Thus Voltage and Current amplified signal can be obtained from the Emitter terminal of the Transistor Q2. This improves the overall power of the signal making it suitable to drive the output speaker connected to it. The signal is then passed through a capacitor C4 which blocks the DC element from the output signal. C3 a decoupling capacitor was used to keep away the stray noise and avoid oscillations affecting the circuit.

Thus the final output signal will be both current and voltage amplified and can drive the Speaker directly and capable of producing loud and clear sound from it.