JohnsHopkins and Darpa are working to Revolutionary Prosthetics: bionic hand offering a Sense of Touch 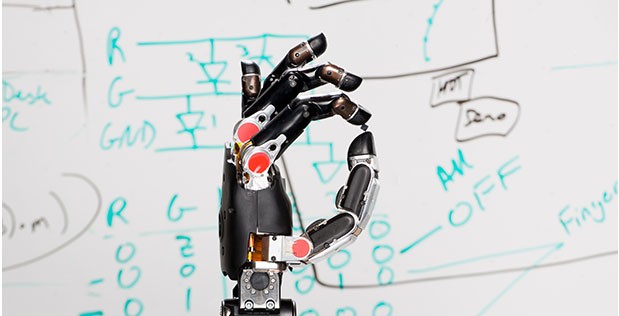 Johns Hopkins University and its Applied Physics Lab is successfully working to an amazing program to give back the sense of touch to people using prosthetics. The new discoveries are part of Darpa Revolutionary Prostethics programme that is financing R&D departments all over the world, like the italian IIT that also released an advanced bionic hand.


Thirty-five volunteer amputees participated in a Department of Veterans Affairs (VA) funded optimization study in VA and DoD medical centers and provided design feedback for the development of the Gen-3 Arm System by DEKA Integrated Solutions Corporation, one of two primary performers on the Revolutionizing Prosthetics program. Based on that testing and subsequent refinement, DEKA submitted a 510(k) premarket notification to the FDA in April 2012 seeking approval to make the Arm System commercially available.

DARPA researchers have also attained promising initial results on achieving brain control of an advanced arm system developed by the Johns Hopkins University Applied Physics Lab, the second primary performer on Revolutionizing Prosthetics. This work with tetraplegic volunteers has demonstrated the potential to use advanced prostheses to improve the quality of life for victims of paralysis.

The Revolutionizing Prosthetics program is ongoing and aims to continue increasing functionality of the DARPA arm systems so servicemembers with arm loss may one day have the option of choosing to return to duty. Additionally, the dexterous hand capabilities developed under the program have already been applied to small robotic systems used in manipulating unexploded ordnance, thus keeping soldiers out of situations that have led to limb loss.