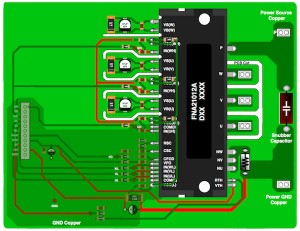 
This reference design supports design of 1200 V Motion SPM® 2 series. It should be used in conjunction with the 1200 V Motion SPM 2 series datasheets as well as Fairchild’s application notes. The SPM® 2 series are used in applications such as system air conditioner and industrial inverters. It is a 3-Phase IGBT Inverter that includes control ICs for gate driving and protections. One key feature of the design is that it is a single-grounded power supply due to built-in HVICs and bootstrap operations.