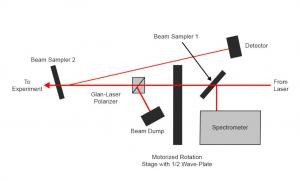 This application note describes a closed loop, computer- controlled, variable attenuator for the control of output power from a tunable laser. It is based on the combination of a 1/2 wave-plate and a polarizer. The algorithm used to control power operates in a closed loop with Proportional Integral Derivative (PID) feedback, compensating for slow changes in output power.


The theory of operation for the computer-controlled variable attenuator is based on Malus’s law. The intensity, I, of linearly polarized light that passes through the polarizer is given by I = Io cos2θ where I is the input intensity and θ is the angle between the ø beam’s initial direction of polarization and the axis of the polarizer. Rotation of a 1/2 wave-plate mounted in a rotational stage allows for continuous rotation of the polarization direction of the linearly polarized light. Thus, combined with a polarizer, it provides variable attenuation according to (1). Rotation of the wave-plate by an angle of φ results in a polarization rotation by an angle of 2 φ, thus the intensity at the output of the attenuator is given by, I = Io cos2 2φ where φ is the azimuth of the 1/2 wave-plate. The full range of attenuation is realized over 45º of rotation.