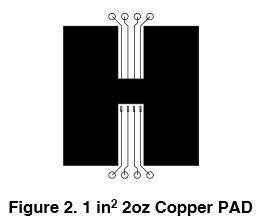 In applications requiring high current and small footprint electronic switches, a Power MOSFET packaged in an SO-8 is usually the best choice. This is because the combination offers low on-resistance and reasonable power handling. A second benefit is the numerous suppliers for this product. As a result, SO-8 Power MOSFETs are commonly found in applications such as notebook computer DC-DC converters, battery chargers, and disk drive motor controls.


SO-8 packaged Power MOSFETs handle about one Watt under “typical” conditions, regardless of the silicon size. The thermal capability of any semiconductor is strongly related to the operating conditions, however users often overlook the importance of such criteria. In addition, the lack of an industry standard means that MOSFET manufacturers may mislead the power handling of SO-8 Power MOSFETs by two to four times their typical thermal capability. Users should also remember that current handling is proportional to power handling. By simply manipulating the power rating conditions, MOSFET manufacturers can tailor any current rating to any “non-typical” condition.