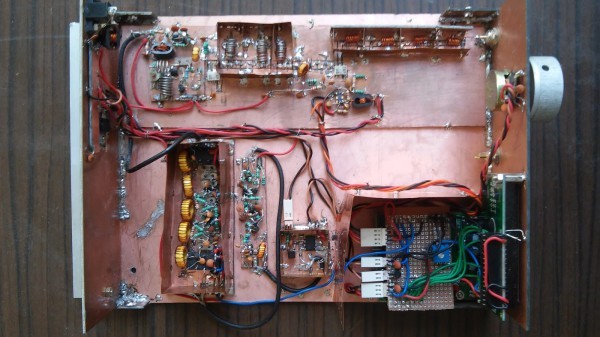 The Specan is actually a very simple but robustly built receiver. it is, in essence, a double conversion superhet receiver with 112 Mhz and 12 Mhz Intermediate frequencies. The first mixer uses an Si570 as the local oscillator. The second oscillator is a crystal controlled at 100 MHz; built with a common microprocessor crystal of 20 MHz. Unlike most radio receivers, the second IF has two filters : a narrow band crystal filter with 1 Khz bandwidth and a wide band LC filter with 300 Khz bandwidth. The detector converts the tuned signals into a log scale. The detector output is a decibel measure of the incoming signal.
The Specan is controlled with an Arduino board. The Arduino controls the Si570, handles the front panel, talks to the computer over the USB port, reads the detector and switches the filters.
In a very simple usage, the Specan can be tuned around like a regular radio. Instead of listening to the signals, you read their strength on the LCD display.