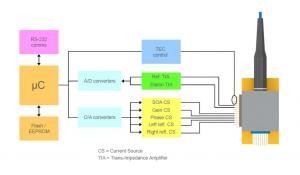 This document explains the general principles of operation of Finisar’s S7500 tunable laser. It provides a high-level description of the circuitry needed to control the S7500, as well as the control algorithms running on that circuitry.

Finisar’s patented tunable laser, the Modulated Grating Y-branch (MG-Y) laser, is based on a conventional distributed Bragg reflector (DBR) laser. The tuning range of a DBR laser is however limited to ~1 THz (~8 nm), which means a single DBR laser can not cover the full C- or L-band. In order to extend the tuning range, the single grating reflector of the DBR laser is replaced by a combination of two modulated grating (MG) reflectors.


The operation of the MG-Y laser is based on the Vernier effect. The two modulated grating reflectors have a comb-shaped reflectivity spectrum. The combs have slightly different peak separations, such that only one pair of peaks overlap at any time. Both reflections are combined using a multi-mode interference (MMI) coupler.