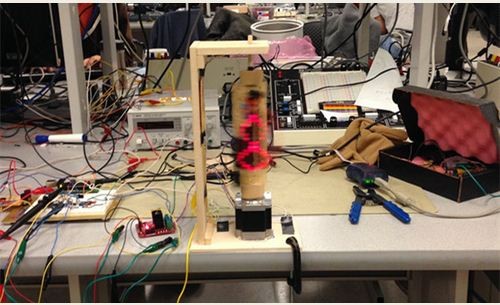 In this project, the user can ask the ball a yes/no based question and the ball will display the answer in form of a sphere which is achieved using persistence of vision. The sphere display has been created by spinning semi-circle shaped LEDs around a central motor shaft. The rotational speed of the LED’s is fast enough such that the human eye perceives a two dimensional image. The software part of the project basically calculates the refresh rates of the LED so it seems like a 2D figure.


There are 19 LEDs consisting of the semi-circle and the entire display area is mapped to a 19 by 90 matrix where each element in the matrix represents a pixel. The device is powered by a ATMEGA128p connected to Led subsystem and the mic circuit. Whenever the Atmega detects an end of the question, the sphere displays a randomly generated yes/no as an answer to the question. Another feature about our device is that the LED array can generate quite bright light, people can see the display without having to turn off the light. A project which can be made to amuse people in your free time and also to learn the concept of persistence of vision.