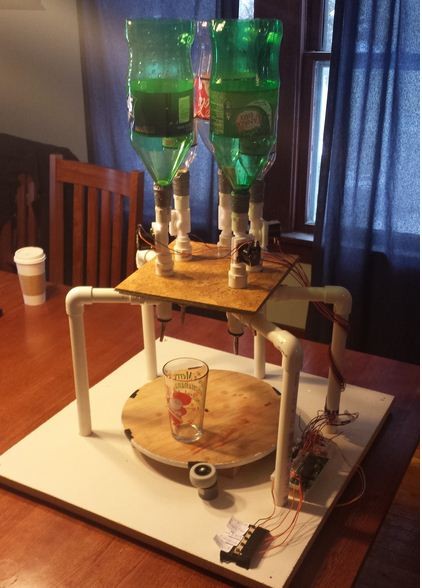 This project is done by Justin and Austin who studies at Cornell University. This project doesn’t require any human interaction except placing the glass at the correct position to make a mixture of drinks. The user can select the required drink from up to 16 predefined drinks and then all he has to do is place the glass, the project will do the rest. They have used a bidirectional DC motor and solenoid valves to turn an ordinary Lazy Susan into a rotating platform system that could move a glass under inverted bottles and dispense liquids in a controlled manner, in order to make mixed drinks.


A Atmega1284 MCU is used to control the liquid flow and its movement. The entire code is programmed using AVR studio and the language used is C. A feedback control loop and an IR sensor is used to track the position of the glass. The nozzles of the inverted bottles are attached to the valves, which are opened and closed by the microcontroller and hence used to control the flow of the liquid. A different project which can be improved by using a touch screen interface and preferable adding more number of drinks allowed in the menu.