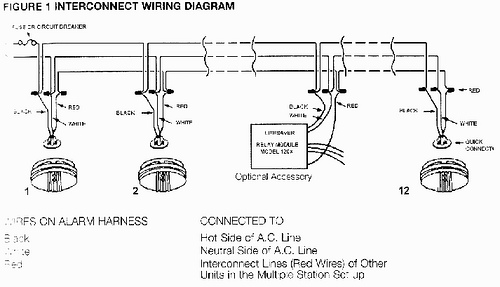 I have always wanted to alert the Home Automation System if the smoke detectors were triggered. I had previously thought of using a microphone near one of the units to pick up the sound of the siren, but this seemed a little kludgy to me.
Alternately, I noticed that there is a third red wire that connects to each smoke detector. I have always wondered if this could be used to monitor any alarm conditions. However considering that this is a system fed by 120V, I have always hesitated to put test equipment onto that line. Then in the Spring of 2004, one of our smoke detectors started to chirp periodically. Unlike previous times, a new battery did not resolve the problem. Since I have heard that smoke detectors should be replaced after 10 years, I decided to change them all as they are all the same age. After purchasing a new set of detectors, I noticed an interesting device on the “Interconnect Diagram” on the enclosed instructions. It was an optional accessory called the “Lifesaver Relay Module Model 120x”.


The above diagram shows how the system is interconnected. Each smoke detector is supplied power from the 120V power line via the Black and White wires. In addition, there is a Red wire in the system that connects only to the smoke detectors’ red wire. This is obviously the means by which they communicate with each other, and I decided to investigate the voltage on this line during an alarm event.

As a start, I first pressed the ‘test’ button on the basement smoke detector (the most accessible unit), and was pleased to hear that the other smoke detectors in the home also sounded. This meant that I had a ready means of stimulating the interconnect feature. Using a DVM, I quickly found out that when there is an alarm event, 9 Vdc is present on the red wire with respect to the white ‘neutral’ wire. I could connect a relay to this red wire, and signal the Home Automation System. After some further readings, I put the results in a model of the interconnect output.