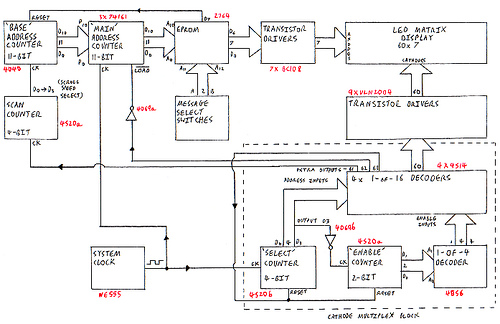 The Moving Message Display System (MMDS) was one of the projects for A-Level electronics which I started January 1997.
What follows is more-or-less the original report for the project, and it explains the operation of the system and the design process for version 5 of the system. Later on, in version 6, I added to the design by allowing the system to be programmed from a computer via the parallel port, and increased the display size by using discrete LEDs on a large PCB. Versions 5 and 6 were built on breadboard, although I did try to build the final circuit on a PCB, but this failed to work correctly (possibly due to interference).


Please note that this is not an ideal solution to the MMDS problem since it uses lots of logic ICs. The better solution would be to use a microprocessor to control the system, whereby the IC count would be smaller and you could probably make the MMDS have more features. However, the project shows how it is possible to build a complex system from fairly simple logic ICs, so hopefully you will find it interesting.