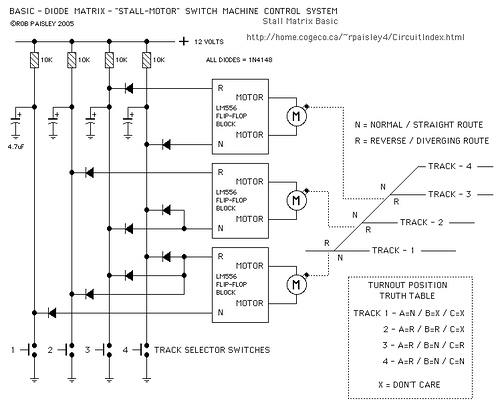 The circuits on this page are basic designs for “Diode Matrix” switch machine control systems that can be used to operate “Stall Motor” switch machines in ‘Ladder’ type storage yards or other multiple turnout areas. The driver circuits themselves use LM556 dual timer chips to reverse the polarity of the voltage to the switch machine motors.
Switch Machine Driver Notes

If you would like to make use of this type of circuit, please take the time to build one and do some experimenting before actually installing them on your layout. This will give you a better understanding of the circuits and can save a lot of frustration down the line.

The maximum current the the outputs of the LM556 timers can source or sink is 200 milliamps. These circuits could, in theory, control 10 or more Tortoise™ switch machines. Also additional LED’s could be connected to the outputs.

If desired, one motor control block could simultaneously drive the switch machine motors at both ends of tracks in a ladder yard.

These circuits do not need a regulated power supply but the voltage should be well filtered.


The matrix diodes in these circuits have to carry less than one-half of a milliamp compared to four or five amps with twin coil machines. This allows the use of low power ‘signal’ diodes for this application.

Due to the design of this type of system and the use of stall motor switch machines any number of turnouts can be thrown at the same time because none of the motors has to share a limited amount of power from a capacitor as is the case with twin coil / diode matrix control systems.

In fact, due to the nature of the stall motors used in these switch machines the entire switch control system draws less current when the motors are in motion than when they are stalled at the ends of their travel.

In order to reduce the possibility of electrical noise causing false turnout throws care should be taken when routing the matrix control wiring. If possible keep the push buttons, diode matrix and motor driver blocks as close together as possible and making the wires to the switch machine motors longer.