Internal Bluetooth for your Tablet PC 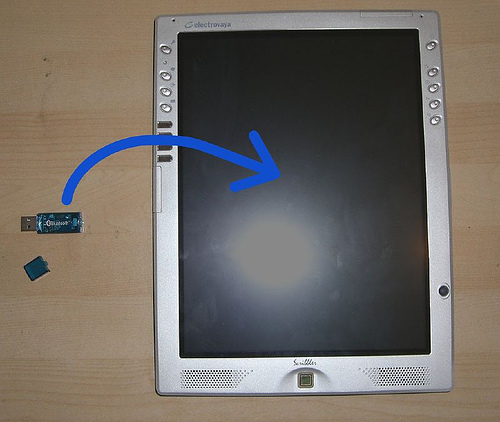 I wanted to add internal bluetooth to my tablet PC, so I took a USB bluetooth dongle and shoehorned it into my tablet; adding a little control PCB to allow it to be turned on and off.
Firstly I looked at the current consumption of the dongle, as I was wondering whether to bother to add a power switch of some sort. I desoldered the USB plug with my hot air reflow tool (could have used my soldering iron, of course, but to a man with a new hammer everything looks like a nail).

It used about 50mA when idle! I desoldered the LED, but that only used about 10mA of course. When transmitting it went up to around 140mA. 40mA is, arguably, fairly insignificant when compared to the rest of the hardware (and 10Ah battery!), but I still found it quite offensive. A power switch was required.


I didn’t want to destroy the cosmetics by adding an external switch, so I had to make use of the existing tablet buttons. There are 9 buttons on it, but all except the wifi button do something immediately when pressed. The wifi button turns the wifi on and off, but must be held down for a few seconds. So I considered turning on the bluetooth with a tap of the wifi button, leaving the wifi-switching functionality intact. A more elegant solution, however, was to use the Fn button somehow. Pressing the function button in combination with each of the other buttons activates some secondary feature, with the exception of the power and wifi buttons. Some of these features are useful, and others can be reassigned in software, so I wanted to leave them alone. So I decided to have Fn+Wifi toggle the power to the bluetooth module. This made sense to me, because both of the radio devices would share a switch!