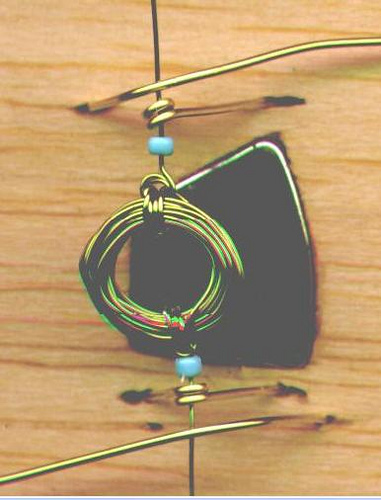 One easy way to make the motor run faster is to add another magnet. Hold a magnet over the top of the motor while it is running. As you move the magnet closer to the spinning coil, one of two things will happen.
Either the motor will stop, or it will run faster. Which of these happens will depend on which pole of the magnet you have facing the coil. Make sure you hold the motor down so the magnets will not jump together and crush the little motor!

There is another way to speed up the motor. The motor only gets electricity during half of the cycle. During the other half, the insulation blocks the flow of current. This is necessary because once the coil has spun around to face the magnet, if we let the current continue to flow, it will stay stuck there, facing the magnetic pole to which it is attracted.

But suppose instead of just stopping the current, we reversed it, so the north pole of the electromagnet became the south pole, and vice versa. The coil would want to flip over again! And since it is already going in one direction, that is the direction it will choose to continue going (due to the inertia and momentum of the coil).


Now all we need to do is to figure out how to get the current to reverse, and how to get it to happen at the right time.

It turns out to be pretty easy. Place the motor in front of you, so that the axle goes left to right. Now attach a bare wire to the left support, and let it rest on the right axle, just past the right support. Do the same thing with the right support and the left axle.

Below is a photo of a motor built this way. The connections are hidden underneath the base for neatness, but you can see the wires resting on the top of the axles, and know that they are connected to the opposite supports.