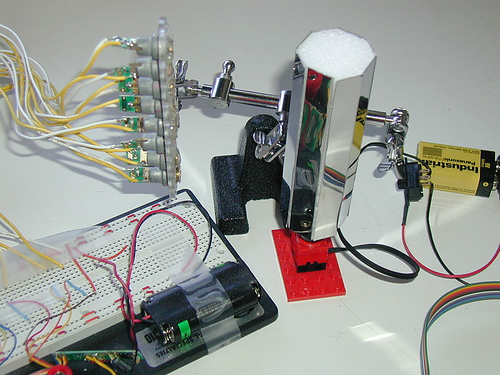 It is a very small portable character projector, based on inexpensive laser diodes, projecting a single line of text onto nearby walls and tables. It might be useful for projecting text from portable and wearable devices like cellhones and PocketPCs that will be connected, e.g., via wireless serial connection.
The overall design is radically simplified and miniaturized. Compared to all the earlier versions, which used laser diodes salvaged from cheap key chain laser pointers, the current prototype has smaller low-cost low-output laser diodes that allow for just one row of eight lasers instead of two interlinked rows of four lasers, making cumbersome primary deflection mirrors obsolete.


All body parts of the prototype, including the critical lens assembly and mirror holder, were designed completely in CAD software, and then 3D printed in ABS plastic.

The system is now closed loop: an IR LED/photodiode combination signals the PIC chip when the mirror is at its origin, which enables a precise overlapping of the laser pulse sequences.

Compared to the earlier prototypes, a PIC chip with more memory (and EEPROM) is used in the current prototype, which allows storing character templates for the complete alphabet as well as some special characters.

A two-way serial port connection with both Palm PDAs and Java enabled cellphones is demonstrated. From either device, arbitrary text can be sent to the projector and is displayed; in addition to that, preset text lines stored on the projector itself can be triggered from these devices.