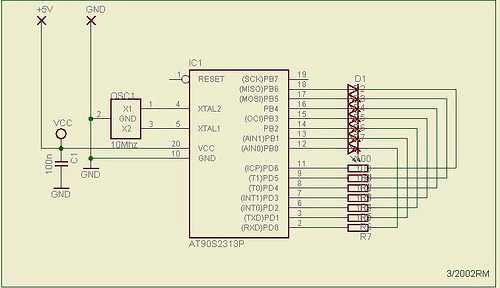 This is a good project for beginners. It is easy to build.This running LED light uses seven bicolor led’s red and yellow, they light up in a pattern that can be made within the program code.The program code is written in assembler. Atmel AVR studio is used to write the program.
The project uses the AT1200 but the AT2313 can also be used. As a clock source a 4Mhz ceramic resonator is used, this is cheaper than a crystal. The board has to be powered with 5V DC.