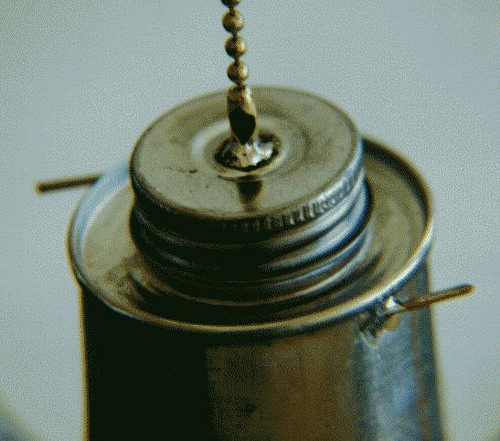 In the first century AD, the mathematician Hero of Alexandria described a device called the aeolipile, in which steam was conducted through pipes from a boiler to a sphere which had two jets from which the steam could escape.
Hero’s steam engine was probably a toy (if it was ever actually built) and not put to any useful purpose. Continuing in that fine tradition, we will build a version of his engine for the same purpose. Our version will be much simpler to build, since we will need no steam-proof bearings for an axle.

We start with a tin can. The can will be both the boiler and the rotating part with the jets. This simplification eliminates any need for steam to enter the jet chamber through tight fitting bearings. We insert two thin brass tubes into the can near the top, and opposite one another. We bend the tubes so they are tangent to the can, and crimp them almost shut, so the steam pressure can build up inside the can.

I have made several aeolipiles from various tin cans, and some work better than others. Small cans like those tomato sauce comes in work well, but they have no convenient screw tops through which to add water. One must draw the water in through one tube by sucking on the other, which is not a very dignified way to show off first century high technology. The best can I have found to date is a small can used to hold ‘Oatey Purple Primer’, a solvent for PVC plumbing pipe. This product is inexpensive, and easy to find in most hardware stores. Pour out the contents into a jar and give it to your favorite plumber, and wash out the can well.

The Oatey can has a wire soldered to the lid, and a ball of fibers at the other end of the wire to act as a brush for applying the primer. Cut the wire off as close to the lid as possible using diagonal wire cutters. Purists may unsolder the wire, but this takes longer. Dispose of the wire, we won’t be needing it.

Next we use a very small nail (actually I usually use an old jeweller’s screwdriver, but a small nail works fine) to punch two holes near the top of the can (1/8th of an inch from the top, so we have a little wiggle room). The holes must be directly across from one another, or the engine will wobble a lot (it will wobble a lot anyway, so don’t worry too much about precision). Two small brass tubes, about one inch long and as thin as you can find now go into the holes, one tube in each hole. The brass tubing can be found in most hobby stores. It can be cut with the diagonal cutters, but then one end must be filed down so it is wide open. The other end can be opened by squeezing it with a pair of pliers, since we don’t want it open all the way. The tiny opening you get by squeezing makes a perfect nozzle for the steam to escape.


The wide open end of the tube goes inside the can, and the nozzle end sticks out. The tubes are pressed against the can so they are tangent to the can, rather than sticking out straight.

Now we solder the tubes to the can. Use a high wattage soldering gun or iron (the Radio Shack 100 watt soldering gun works great), since the can will absorb a lot of heat, and the little soldering pencils used for fine work in printed circuit boards aren’t good for the kind of plumbing we are doing. Always use lead-free solder on any toy or object that will be handled, especially by children, who are more sensitive to lead poisoning.

Now solder a length of beaded brass chain (the kind used as a pull chain to turn lights on and off) to the top of the lid, in the center. This chain will act as a support to hold up the engine, and as a bearing, to allow the engine to spin. I have tried fishing swivels, and they work, but the chain has less friction, and is cheaper (unless you have some fishing swivels lying around).

I usually solder the connector of the chain to the lid, since it is easier to handle with a pair of long nosed pliers. But if you are making more than one engine from one chain, you can simply solder one of the beads to the lid, taking care that the hole in the bead where it connects to the rest of the chain is straight up. The chain can be anything from 3 inches to a foot long, depending on how far up you want to put the support (which we will describe later).