A 2kVA 12VDC to 120VAC inverter for power backup 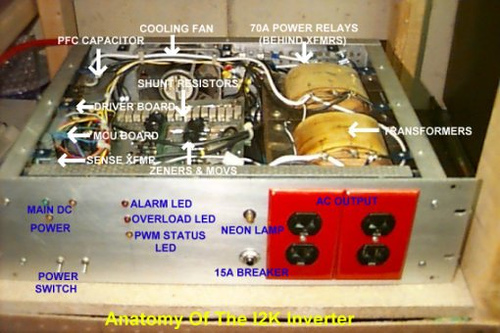 The project presented is a 2kVA power inverter designed for backup during utility failures. The inverter is affectionately called the I2K for two reasons: It has a 2kVA output capacity and some have suggested it might have been useful when Y2K hits (remember the Y2K paranoia/fiasco 🙂 Duh.
This inverter is of a traditional ferroresonant design using large step-up transformers however the pulse-width modulated signals which feed the transformers are generated in real-time by a PIC RISC microcontroller. The microcontroller senses AC output voltage via an 8-bit ADC then adjusts the pulse width accordingly using a closed control loop algorithm. The functions of waveform timing, pulse width adjustment, and error control (shutdown when overload occurs) are all done in software making upgrades easy to accomplish.

Many commercial inverters tested, including those used for PC UPS usages, will not provide the enormous start-up currents required by many motors — especially single phase motors under load such as those found in the average natural gas furnace. This design provides those required currents and, during one test, was observed to convert over 2kVA of power (The input current exceeded 200A at 12VDC for several seconds until the motor started). Software control of the inverter allows the inverter to be overloaded for a period of time before shutdown occurs giving the motor time to start.


The inverter has been tested on 1/3hp single phase motor loads as well as with large resistive loads of over 1500W and has performed well. Power factor correction was found to be required with large motor loads and has been included in the design.

Efficiency of the inverter (Power Output / Power Input) driving a variety of both resistive and inductive loads ranges between 71% and 82%. With an improved sinewave algorithm it is felt that the inverter can approach the theoretical efficiency limit of 92%.