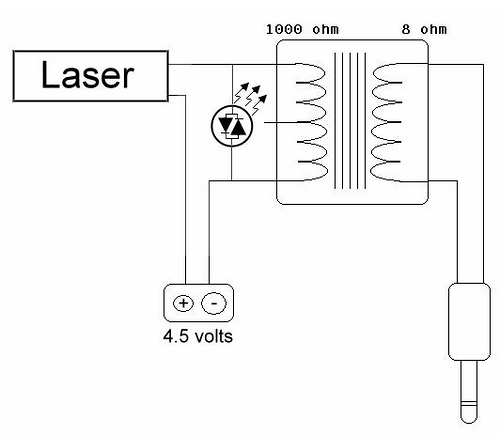 How would you like to talk over a laser beam? In about 15 minutes you can set up your own laser communication system, using cheap laser pen pointers and a few parts from Radio Shack.
For the transmitter you will need:

A laser pen pointer. You can get one for $10 from our catalog.

A battery holder that holds the same number of batteries as the laser pointer (often 3 cells). The batteries can be any size, but they must be the same voltage as the laser batteries. You may need to get one that holds two cells, and another that holds one cell, and wire them together in series. Radio Shack has a decent selection.

A transistor radio. Later we will use a microphone and an amplifier (Radio Shack #33-1067 and #277-1008), but at first we will send your favorite radio station over the laser beam.

An earphone jack that will fit your transistor radio (Radio Shack #42-2434).

A transformer of the type known as an audio output transformer. It consists of an 8 ohm coil and a 1000 ohm coil. The one I used is the Radio Shack #273-1380. We now carry them in our catalog.

Some clip leads (wires with alligator clips on the ends) to put it all together. At least one of the clip leads should be the type with a long slender point (Radio Shack #278-016, #270-372, or #270-334), to connect to the inside of the laser pointer. You can substitute regular wire and solder if you like, but the clip leads are fast and simple. Radio Shack has a wide selection of clip leads (such as ##270-378).

For the receiver you will need:

A small solar cell (such as Radio Shack #276-124). You may have to solder your own wires to it if it doesn’t come with wires attached.

Remove any batteries from the laser.

Connect a clip lead to the inside of the laser pointer where the battery touched. Usually there is a small spring to which you can attach the clip lead. The other end of the battery usually connects to the case of the laser. Since there are many different styles of laser pointer, you may have to experiment with clip lead placement to get the laser to work with the new external battery pack. You may also have to hold down the laser’s push button switch by wrapping a rubber band or some wire around it. Test the connection before you attach the transformer, to make sure the laser works with the new battery pack. If it doesn’t light, try reversing the battery. Battery reversal will not harm the laser.

Connect the bicolor light emitting diode to the two outside wires of the transformer on the 1,000 ohm side. We are using this part (the bicolor LED) as a protection device to prevent the laser from getting high voltage spikes from the transformer. We didn’t need to do this with the old-style lasers that had protection circuits built into them, but there are a lot of lasers being sold lately that have no protection, and need the bicolor LED to absorb any extra high voltage the transformer may produce when it is connected or disconnected. If you see the LED flash when you connect the battery, you will be seeing it absorb a high voltage spike that might have otherwise damaged the laser.

Test the laser by attaching the battery. The laser should operate normally at this point.

Connect the earphone jack to the 8 ohm side of the transformer. The schematic of the transmitter looks like the picture:

The transformer modulates the power going to the laser. The signal from the radio is added to and subtracted from the battery power, and the laser gets brighter and dimmer along with the volume of the music or voice in the signal.

The receiver is the simplest part. You simply connect the solar cell to the microphone jack, and plug it into the amplifier or stereo phono input. It does not matter which way the wires are connected to the solar cell.