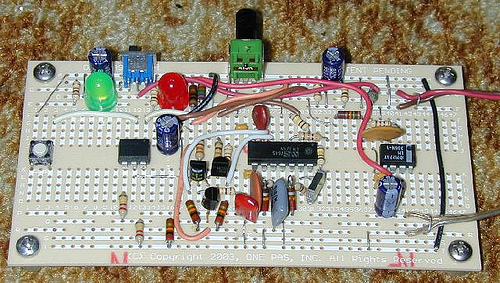 The sine wave is sent to a voltage controlled amplifier which is modulated with a keying envelope. The keying envelope is generated by smoothing out the square wave keyed signal on the 4N32 emitter with the 100K/20n (.02uF) capacitor/resistor low pass filter on the base of the lower transistor. The two 10K resistors in series with the 4N32 set the envelope’s upper and lower voltage to 6V and 0V.

Keying of the circuit is performed either by the manual key input, or via the keyer input, which can be used to connect the circut to a morse code keying chip. To use the keying input, an active low open collector driver should be used.


The audio signal comes out of LM324 pin 7, it connects to a 10K volume potentiometer and an attenuator made with two resistors. The attenuated audio is then fed to the LM386 audio amplifier.

The 200n capacitor on the audio output prevents the LM386 from generating RF oscillations, which it likes to do. I originally tried using the series R-C network that is normally shown on LM386 application notes, but the LM386 would break into RF oscillations.

The circuit nodes marked +12Vf are all connected together, this is the filtered +12V line. The +12V line is filtered through a 10 ohm resistor and across a 100uF capacitor, those components remove audio noise that may be present on the +12V supply.

A careful observer will notice that there are two identical +6V divider chains, one for the oscillator and one for the VCA. I started with a single divider, but the oscillator tone changed when the circuit was keyed. An op-amp divider could also be used, but the cost and current consumption would probably both go up.