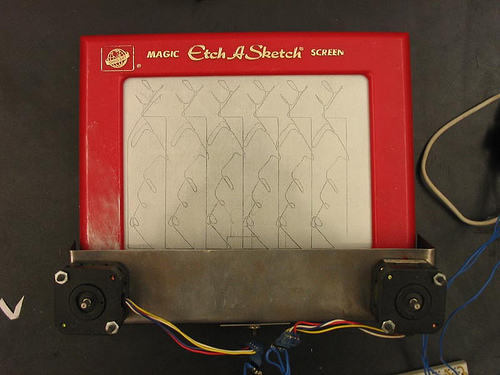 The public was introduced to the EAS in 1960 and since then it has stayed virtually the same.This nostalgic toy is recognized by many generations and we decided to put a new spin on the device.Most Americans are familiar with the two knob design which allows a user to control the movement of a stylus by turning each knob.
In designing this project, it decided to create something that was a mix of mechanical and electrical components and would ultimately be fun to use. Using an EAS would be a throwback to our childhood but adding the mouse also revitalized the toy.Many students who saw working with the EAS were immediately interested in what it doing because it is such a popular childhood toy. Though the control of an EAS with a mouse is not necessarily a practical project,

A small tradeoff in software was the use of automatic changing of the step size. Originally the step size was set via a button on the STK500, but once we realized that we could change this automatically with the amount of mouse movement, this was eliminated. The user is then not in direct control of the step size, but rather the software will do this for

The only way a individual knob on the EAS can move is one step of the stepper motor in either direction, this corresponds to one pixel movement at a time.So the line can now be drawn from a single point either up, down, left, right or diagonal one pixel.This can be accomplished by moving one motor in either direction, or both motors in a direction to achieve a diagonal.Now that we can have a slope of 1, the task of creating the appearance of different slopes was tackled.To do this the EAS starts at the beginning point and finds the slope to the desired end point and tests if its greater than 1 and determines where to move one pixel.After this move is completed the start point is now the current location and the slope to the end point is re-evaluated in a loop until the end point is reached.The code to complete this can be made much simpler and quicker by adding in shifts and several variables to track the change with each movement.