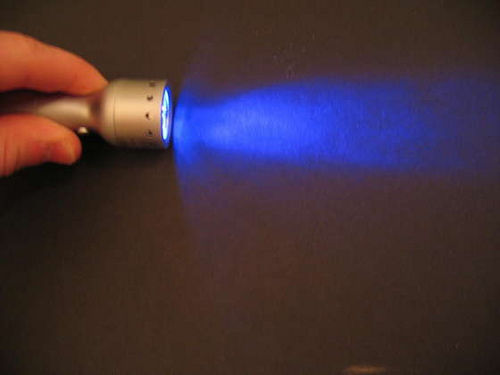 Here’s a quick 10 minute hack to turn an ordinary white LED flashlight into a much cooler blue LED one
Take appart the top part of the flashlight, and remove the LEDs from the reflector part.
This may be hard, as it’s stuck in there, but in the 2 that i’ve done this two, they aren’t glued at all, so it should be easy.
Desolder the old LEDs from the round PCB, be sure to mark the direction of the flat side, as that’s important.
Put the Blue LEDs into the holes you just made. Be sure to keep the flat side pointing in the same direction, otherwise the circuit wont work.
side note, ultra bright white LEDs use the same current as ultra bright blue LEDs, green ones will also work, as should violet, and pink LEDs..
Red or yellow will not work.
That’s it 3 and a half steps, super simple, and even though the blue LEDs are no where near as bright as the original white ones, the simple fact that they are blue makes up for it!.