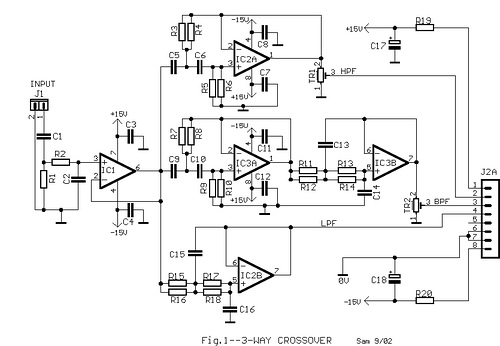 This is a complete electronic section circuit of one 3-way active loudspeaker.The particular circuit has the driving possibility of almost all trade loudspeakers. The choice that made in the crossover stage, is a 3-way crossover Butterworth with cut off -point frequencies 200HZ and 3500HZ, with slope -12dB/oct.
These frequencies can change and adapted in your own speaker’s choice, using the calculation types of Fig.5. Exist the possibility is used other circuit crossover, as the circuit of 3-way active crossover with slope -24dB/oct. The circuit crossover does not exist above in main PCB, but is contact with this via the plug J2A that is applied above in the J2B. This can become if in the place of J2A it’s placed a pinhead with 8 pin and PCB crossover put on above main PCB in form sandwich. It can however be placed in other point and with a flat cable to transport the signals and the voltages from J2A in the J2B. Power supply for ± 15V of the crossover circuits it’s found in main PCB. A point that I want to highlight is with regard to various in the calculation values precision and real values of resistors and capacitors. It’s good, if the component value does not exist in standard value to select a combination that us will give value near in theoretical and simultaneously to do the same and in the other loudspeaker, in order that the divergence is same. In the drawing exist parallel combinations resistors, and somebody’s from these are not used if they do not need. With the TR1-2 we adjust the level of high and mid speakers, if it needs.