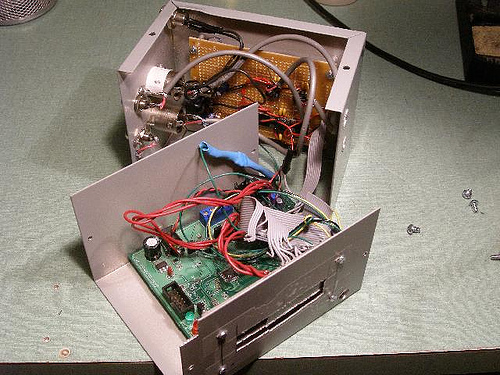 Use the remote Volume Up and Volume Down buttons to increase or decrease the volume. When the volume is changed, the gain, display and bar-graph meter are updated appropriately.

My home stereo uses a pair of powered studio monitors, so I don’t have an integrated amplifier/tuner. Instead, I have an old NAD Model 1000 stereo preamp, which is really just a fancy switchbox with a phono preamp (all discrete!), tone and volume controls, and a headphone jack.

One thing it doesn’t have is a remote volume control. For a long time, this hadn’t been a problem, since all I used the stereo for was listening to music. Now that we’ve got the TV, the Mac mini (used as the DVD player as well as a DVR with EyeTV) and the cable box hooked up to it, lack of remote volume and mute control has become quite annoying. (We HATE commercials.)


But I’m an engineer … I can build my own remote volume control! And I did. Here’s how.

Digital control of analog audio volume control is easy if you use a TI PGA2310 stereo volume control chip. It uses a simple 16-bit SPI interface to load two eight-bit gain-set words, one for each channel. The gain ranges from +31.5dB to -95.5dB in 256 0.5dB steps. The chip uses ±15V rails for its audio amplifiers and +5V for the digital section. (The much-cheaper PGA2311 uses ±5V analog rails.) Basically, each channel consists of a stepped attenuator where laser-trimmed resistors set the attenuation, followed by a variable-gain buffer. The buffer is capable of driving 600Ω loads, so an external line driver is not necessary (for single-ended applications).