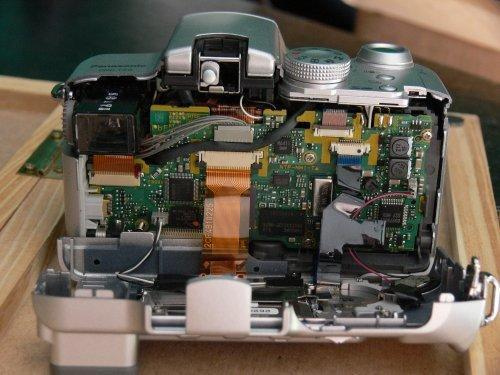 A commonly reported problem with the FZ5 is the lens becoming stuck in one position. This is because the cogs that drive it are made of plastic and the mounting for the lens motor is a bit flimsy.

I forgot to record the sizes, I just tried out tools from sets of screwdrivers and allen keys until I found the ones that fitted best. Even though the screws on the camera are posidrives, a flat head screwdriver was the best fit.

I also swapped the tweezers pictured for some round ended ones when it came to dealing with the ribbons because I didn’t want to accidentally scratch or pierce anything.

The torch was handy for peering at secluded fixings, and I used a piece of scotch tape to hold screws as I removed them.

The tray was absolutely vital. If you disassemble stuff without a tray, small screws will bounce onto the floor and hide and break your heart.


Disassembly: Housing
First remove the lens cap lanyard, any straps, the battery and the memory card.

The first fixing to remove is an allen bolt under the flash. This, along with six screws distributed around the main seam, secures the back to the front of the camera.

Remove all six screws too, and note that three are long, three are short, and both types have different threads. You’re now ready to get inside this thing…

Disassembly: Ribbons and Cables and Screws. Oh My!
Now we’re going to remove and detach the back of the camera. It’s not as scary as it might look.

The back section, which holds the LCD and some of the controls, is connected via two ribbons and two power connectors (labelled in first photo below). The ribbon connectors have fasteners at either side that slide along the same plane as the circuit board. Gently slide them out, and you’ll be able to (carefully!) remove the ribbons.

The power connectors are a little trickier; work them gently, don’t yank no matter how tempted you are. Working a slim object such as a screwdriver blade between the connector and the socket may help, but make sure not to abuse the connection between the socket and the circuit board.

Now you should be able to remove the back of the camera.