How To Build a Dobsonian Telescope 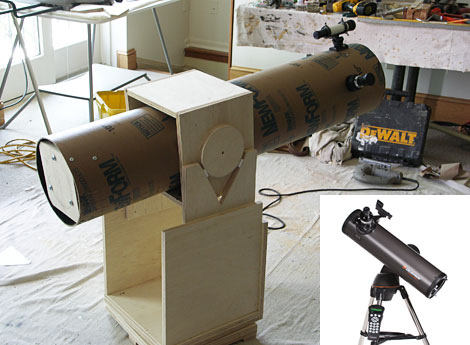 In essence, it is a telescope built onto a gun mount, which balances through friction as it swivels on an LP record.Total cost was around 400 Doller.You may be able to buy a similarly sized commercial telescope at that price these days, but you would not have nearly as much fun. The actual construction took a weekend, and it would be a great project to tackle with kids.
The whole thing was made out of junk.The cardboard tubes were lying around.The shingles used to mount the mirror were blown off roofs in storms. It built the mount from window cutouts from schoolhouse doors that had been thrown away.