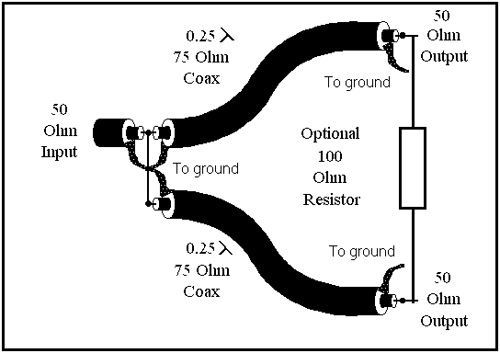 This short article does not attempt to be a treatise on the subject but concentrates on one particular type – the ubiquitous Wilkinson splitter-combiner
Splitters and combiners can be used in many applications, two examples are outlined below. The first application shown in Figure 3 is one of the most common – a phasing harness for a 6M stacked beams. This example was first described by Richard Lax, G4AHN, in issue #23 of SIX NEWS.

Clearly for use as a phasing harness it is not possible to place a 100 Ohm resistor on the outputs as the 6M beams need to be stacked at least 12 feet apart. Also, for 50MHz, just quarter-wave elements would be too short! To solve this problem, one arm is made of length 0.75 lambda while the other is 1.75 lambda – but the principal of operation is exactly the same.


A second application is very useful for use in power amplifiers. Here two identical Wilkinson circuits are used to ‘parallel’ two similar amplifiers in a PA application (figure 4). An added benefit of this circuit is that if one amplifier goes down, half of the power of the other amplifier is fed to the load (-6dB). The other half is dissipated in the fourth port which, of course, is the 100 Ohm resistor. This is the only circumstance when high power will be dissipated in this resistor. The use of heavy UR57 (75 Ohm) and UR67 (50 Ohm) is obviously not of much use here! Better to use 2mm diameter RG179 (75 Ohm) and RG178 (50 Ohm).