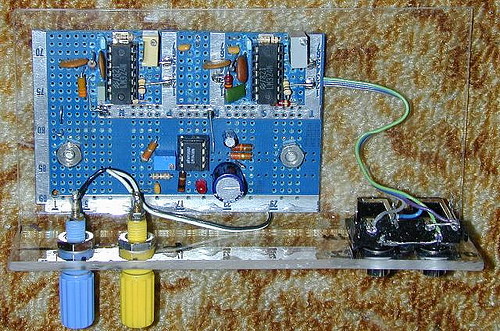 It seves the purpose of aligning an FM Stereo Modulator used in low power FM stereo transmitters. Two tone outputs are available, the low tone has a secondary output that is 180 degrees out of phase with the primary output.
Specifications

IC U3B is wired to produce a virtual ground at half of the power supply rails (6V). This is used elsewhere in the circuit as a reference. The power supply is filtered with the 220uF capacitor. The 3A diode offers some protection against reverse polarity on the power inputs. For full protection, place a 1A or smaller fuse in series with the +12V input.

The triangle waves are passed into low-pass filters, which remove most of the harmonic energy and produce relatively pure sine waves. The two 27K and two 33K resistors set the low pass frequency.

The sine waves are each fed into an output amplifier which can be adjusted for fixed level outputs. The low tone output is also fed into IC U3A which produces an inverted copy of the low tone signal.