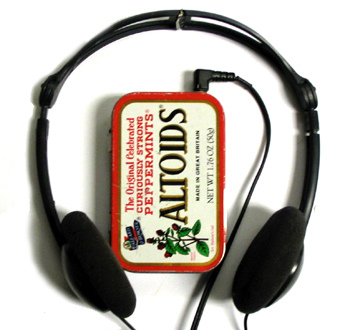 The MintyMP3 hardware is a standard mix of high power 8-bit microcontroller and ASICs.
A single PIC18LF452 running at 20mhz (For v2 the crystal has been changed to 29.4912MHz) with the minty firmware talks to the CF flash card, navigating the FAT16 file system and loading mp3 files, then sending the data to the STA013 MP3 decoder chip. The STA013 decodes MP3 into digital audio which is then converted to linelevel audio by the CS4340 DAC. There is also a MAX576 boost regulator (optional if running from a LiIon battery) and a MAX2606 FM transmitter (optional).

The microcontroller is a PIC18F452 (in particular, the 18LF452, which can run at 3.3V), the ‘really nice’ PIC. Lots of RAM/ROM and can run a bootloader. The PIC reads and writes the compact flash card (for playing mp3s and uploading/deleting mp3s), reads button presses, and configures/runs the STA013 mp3 decoder chip. It understands the FAT16 file system format, although it ignores long filenames. The best way to use it is to program it with a bootloader, such as the tinybld’r, and then upload new firmware as desired through the serial port. Using a bootloader is much faster and doesn’t require a PICStart/ICSP programmer. You can get this chip for free by sampling it from Microchip.