One Pot to Control Two Channels 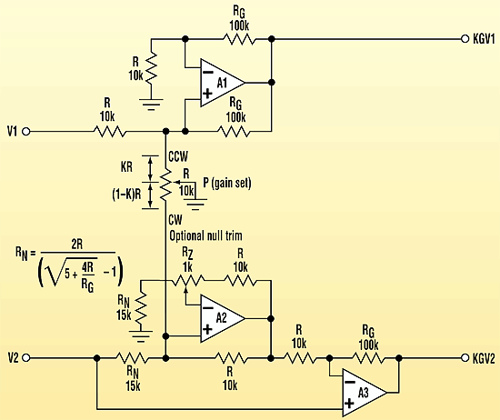 Here’s a clever design idea lifted from the pages of Electronic Design. Stephen Woodward has designed a circuit that allows one pot to adjust two channels.


The scheme hinges on the arrangement of P with its wiper terminal grounded. This setup creates two mechanically linked but electrically independent variable resistances: KR and (1 – K)R. K’s value represents P’s wiper’s position. Therefore, it goes from 0 to 1 as P is rotated from full counterclockwise (zero gain) to full clockwise (maximum gain). R is P’s total element resistance. The net result for both op amps A1 and A3 is a transfer function linear in K:

With the example component values shown, G = 11. Yet virtually any gain factor greater than unity can be accommodated by a suitable selection of resistors and op amps.

Why this formula applies to A1 is easy enough to see. Positive feedback from A1’s output to P’s CCW terminal results in constant current drive to the pot, given by I = V1/R. Therefore, the signal at A1’s noninverting input is equal to I x K x R = (V1/R) x K x R = K x V1. This voltage is boosted by A1’s noninverting gain of G = 1 + RG/R to produce overall gain as a function of K given by VOUT/VIN = KG.