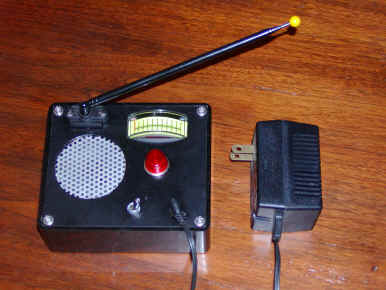 A VLF receiver tuned to 300 kHz designed to detect the crackle of approaching lightning. A bright lamp flashes in synchrony with the lightning bolts indicating the proximity and intensity of the storm.


It has a superior RF section with a single resonance near 300kHz and plenty of sensitivity. The antenna is a telescopic antenna that extends to two or three feet. The prototype is built into a phenolic box using point-to-point wiring. The power switch is a single pole, double throw type with a center-off position. The power supply is connected to the center terminal and the speaker is connected to one of the outer terminals. Both of the outer terminals are also connected to the other circuitry through a couple of silicon diodes, one from each terminal. One diode keeps the speaker from getting power in the ‘speaker off’ position and the other diode is simply there so that the circuitry sees the same voltage in both ‘on’ positions.? Alternately, a switch could be added in series with the speaker to turn it off. After one storm, you will add the switch if you don’t include it at first!