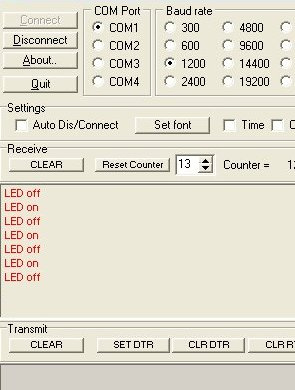 This is a LED that does not really exist, it is in your imagination only. So how do you know wether this LED is on or off? By serial communication to the PC.
Personally I thought this was rather funny, but I know from experience that I’m probably the only one. Anyway, it did reduce the number of parts on the breadboard. Ah, did I mention I moved to a different type of Microcontroller. This is the 16F877 which is much more powerful (alas at a much higher price, about 9 euros).

I used one of Wouters sources to write this program to speed up the development a bit. If the Wisp628 programmer is used it can remain in place during serial communications, assuming it is switched to pass through mode using the command

After that the small Xwisp windows shows the communication that is taking place, or you can switch it off and use another terminal package, like I did.

The source is rather straight forward. Interesting in the source is that the two separate pieces of data are separated by 0’s, so the program doesn’t have to count. The definition part was written by Wouter, and I have no clue why he uses two stop bits instead of the usual one.