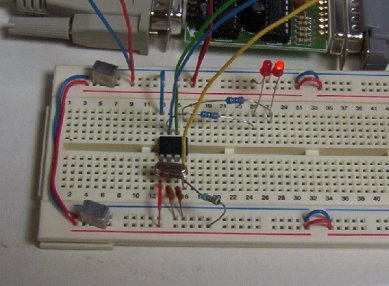 The evergreen in first microcontroller projects. Not much to say, the project is simple and straight forward.So to make it slightly more interesting two LEDs flash alternating.
After the introduction of the programmable bricks at the end of the last century Lego has not done much to impress the adult Lego community. No expansion packs, no new sensors, no new bricks, nothing. In May 2003 Ben Jackson said to me ‘using a pic we can make our own programmable brick, buy (standard) sensors as much as we want, and cheap too, so why wait for Lego?’

Well good point, why wait for Lego indeed. So he send me information on the picoScout he was designing based on a 12f675, and I didn’t understand one bit.


So I decided not to copy his work but start building my own knowledge: the journey is the reward. I went out and bought the necessary stuff. And of course I selected JAL as programming language because back in the dinosaur days I have programmed in assembler and its not much fun. So this is my very first project with a pic!