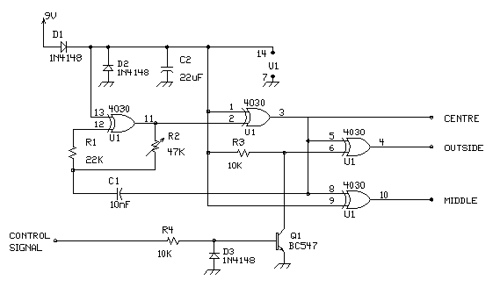 Sega designed special glasses for it’s video game console to be able to produce 3D video games. Those glasses used LCD shutter method for producing 3D images. In this method the picture is snown to different eyes after each other. The LCD panels in front of both eyes are controlled so that one eye sees one screen image and the other eye sees the second image etc. With normal TV it was possible to show 25 or 30 images per second (depending on TV standard used) to both eyes. The image flickers quite much, but gives well noticable 3D effect. 3D games for sega game consoles did not sell very well and Sega dropped those glasses from it’s product lines.

Ever since the Sega 3D glasses are used in many home virtual reality projects. There is free software support for those glasses in some nice VR programs (for example rend386). One of the problem for home experiments have been to figure out how to connect those glasses to PC. There have been two approaches used commonly: serial port and parallel port. For connecting the glasses to those PC ports, the small adapater box (made for Sega game console) is practically useless. The home VR experiments had to devellop their own circuit. This one is the most commonly seen circuit. It is floating in many places and even published (in the form of following document) in at least one small VR magazine, but there is no knowledge who originally designed this circuit.