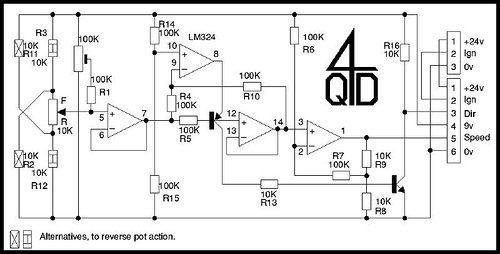 Since this circuit is also used in all the other versions of the interface I will give a detailed description of its operation. This one is intended for use with 4QD NCC or Pro-120 series controllers which use a 9v internal supply, so the circuit is powered from this. However the supply voltage is not critical.
On the left is the 10K pot with a 10K in series with each leg, so that swinging the pot from maximum to minimum will swing the wiper from 3v to 6v. The centre position will be 4.5v, with a ± 1.5v swing. R3 and R12 are normally fitted but, on 4QD’s circuit board, R10 and R2 may be fitted instead to reverse the action of the potentiometer.

R1 and the preset are optional and are for centring the input. However that is always best done by mechanical adjustment so the mechanical centre and true electrical centre coincide. These components also mean that, if a wiper wire to the input pot breaks, the circuit does not go to full speed but remains at zero (centre).

The IC used is a quad op-amp such as LM324. The first stage simply buffers the pot wiper. So we get 4.5v ±1.5v on pin 7. This is fed to the second and third sections of the chip which form a precision rectifier circuit. To understand this, consider only the base-emitter junction of the PNP transistor, which is used as an ordinary diode.

Pin 7 feeds via R5 to pin 12 of the IC, which is a unity gain follower – so positive input swings (above centre point) are followed through to pin 14.

Negative swings cause a positive excursion of pin 8 so the transistor diode immediately goes into conduction and pin 8 is coupled though the diode to pin 12 which is unity-gain followed through to pin 14. So pin 14 is (one diode below) pin 8. The section 8/9/10 now becomes a unity gain inverting amplifier with gain determined by R4 and the feedback resistor R10. So for negative swings, the excursion is mirrored into a positive excursion at pin 14.

Pin 14 therefore goes positive of centre point for negative excursions and positive also for positive excursions of the input, both with overall unity gain, so it gives a rectifying action. Aka ‘Absolute value amplifier, or ‘Precision rectifier’.

Now here’s the crafty bit (which as far as I know is original to the author): When the transistor’s base emitter diode is forward biased, current can also from out of pin 8 through the now-turned-on transistor and through R13 into the base of the direction output transistor. So this second transistor switches off for positive excursions and on for negative excursions. This gives a direction indication output with very few extra components!

Actually, because the parallel value of R8 and R9 is 5K, the effective bottom-end resistor is 105K, so the circuit will want to go slightly below zero. It cannot – but the effect will be to introduce a small ‘dead-band’ of 5% as the swing has to move 5% to bring this point exactly to zero. It also slightly alters the gain calculation.

The two connectors are a 6 way, designed to mate with 4QD’s NCC series controllers, and a 3 way which is used to power up the NCC’s ignition circuitry.

A 65K GIF of the layout of 4QD’s assembly of this circuit which 4QD can supply as:

A complete joystick assembly, including the ready built and tested board as shown, with a 50 degree pot (Order code POT-050) ready mounted on the board. Order code JSA-002.